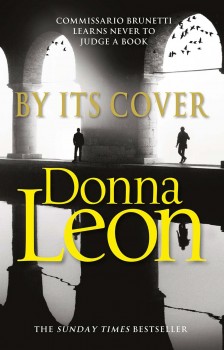 A theft of pages torn from some ancient books is reported by a library in Venice. Commissario Brunetti is called in to investigate. The suspicion is that an American researcher may be involved.

The librarian of a well-respected library in Venice reports that pages have been removed from some valuable old books. Commissario Brunetti takes on the case and with only one real suspect, an American researcher, it is difficult to know where to begin.

A great strength of this book is the way in which the inspector understands people and is able to use such a variety of strategies to get them to talk: from the psychological games he and his wife play which form the bedrock of his happy marriage; how he gets the secretary in his boss’s office to talk just by hanging around and rearranging the tulips in their vase; to the way he gets the victim to open up by leaving spaces in the conversation, providing supporting commentary to the man’s story and so on. Understanding the psychology of people is a theme throughout the book,

There are also some lovely touches of ironic humour such as Brunetti’s thoughts about decision-making for the family holiday and his view on the problems of “giving children the vote.” This talent for observation also applies to descriptions of people: from Foa standing arms folded and ankles crossed as he waits for Brunetti; to the elderly librarian who is just like a gangly bird; and the velvet on the settees in Florians in St Mark’s square reminding him “of the bald patches on his children’s long-abandoned teddy bears.” Indeed, a huge strength is the many lovely descriptions of Venice, from unknown corners of faded glory to some more familiar tourist spots.

So whilst there is much to enjoy about this book there is one thing that could be deemed disappointing. The plot seems to be the least important aspect. The context is interesting but there is no suspense and very little mystery to challenge the reader. Right from the start the plot appears to have little potential for development given the paucity of characters. One other small criticism is that of the translation. Although the text reads well overall, there are some very basic errors in the grammar in places.

So although this book fits into the genre of crime fiction, perhaps it is best read as a vehicle for the descriptions of Venice and the perceptive insight into people and their ways of behaving. For these aspects it is truly delightful.