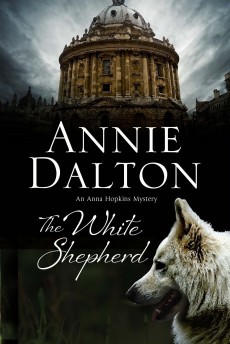 Anna Hopkins has led a solitary life. But when her dog Bonnie finds a body in Oxford’s Port Meadows, Anna finds a support network as they attempt to trap a murderer.

If the thought of twee cosies with cats doing the investigating makes you twitch, don’t be put off by the ‘canine mystery’ strapline on The White Shepherd. There are definitely some rather handsome hounds in it, but they’re neither narrating nor tracking down the killer in what is a surprisingly dark story.

Anna Hopkins is on her daily walk through Oxford’s Port Meadows when her white German Shepherd dog finds a body in the undergrowth. And Anna realises she knows the victim. Naomi Evans, a researcher working on a book about a famous and controversial Welsh poet, had offered to help Anna trace Bonnie’s former owner.

Two other dog walkers, the alternative-looking Tansy Lavelle and the bohemian Isadora Salzman, stay with Anna until the police arrive. And the three women remain in touch as they become concerned about the way the murder enquiry is progressing. The police say it’s a random killing – Anna and Co aren’t convinced.

The White Shepherd is a slow starter. I was convinced at one point that it was going to be the usual unbalanced woman with tons of baggage angst. But once Dalton gets into her stride, we’re presented with an intense and disturbing book with a cabal of resilient female characters. Particularly well handled is the growing affection between Anna, Tansy and Isadora, alongside Anna’s realisation that it is safe to emerge from her cocoon and to make friends.

The Oxford setting works excellently, and pulls the reader into both the world of town and gown, with the enclosed world of the colleges, and the quirky bars and cafes lining the town centre. And Dalton pulls off that difficult trick of persuading the reader that the amateur sleuth is left with no alternative but to stick their nose into the mystery. This is helped no end by believable links with the police, who aren’t shown as complete idiots.

Kudos, too, to Dalton for her sensitive handling of the mental health angle. Anna has kept herself apart from people since her family were murdered when she was in her teens. I was in two minds about that past history for most of the book, given it’s a fairly common genre trope, but it naturally informs who Anna is now, why she behaves as she does and why she mistrusts the police.

Dalton is a YA writer branching out into adult mysteries. I hope she writes more. Her world is tightly-woven and the characters are well-developed and vivid. I particularly liked the way the supporting cast – including one you never see – is drawn in so well. Anna’s work colleagues – geeky Paul, Kirsty and the mysterious Natalie of the passive-aggressive post-its – are wonderful! There’s also a sad cameo from a reclusive composer. For me, the only weak link in an outstanding book is Anna’s obligatory love interest, who is rather too convenient on all fronts.

The glimpse into the tangled literary world is an intriguing one, and allows Dalton to present us with more complex characters. The White Shepherd really is an object lesson in how to juggle a fairly large cast with ease and to ensure that each one of them is a three-dimensional person. It should be required reading on all Creative Writing courses!