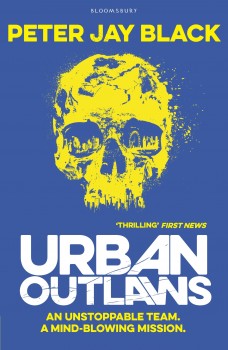 A group of kids go up against some formidable opposition in a bid to stop an advanced super-computer being misused.

In a hidden bunker deep beneath the streets of London, a group of kids have set up a secret base which has become their home. Jack Fenton, 15, online name Achilles, is a computer hacking whizz. Charlotte Caine, better known as Charlie, is the same age as Jack, and her forte is making gadgets. Joseph Harrington, aka Obi, is their conspiracy theory-loving surveillance expert. Twelve-year-old Tom Smith is Slink, a daring free runner with a dubious taste in music (according to Jack!) and Jennifer Jenkins, nicknamed Wren, is the youngest of the group at only ten. Her skills are pick-pocketing and decoy work.

None of them have families now, other than the one they’ve made for themselves. They live off a series of clever scams, in a modern day – and much younger - version of Robin Hood. The gang are introduced in the middle of an attempt to divert money from the account of one of the country’s biggest arms traffickers and give it to a children’s hospital. It was meant to be a simple in and out job, no hassle, but when security guards with guns turn up, things get serious.

Urban Outlaws jumps straight into the action with no wasted words. The kids leap off the page as individuals right from the start. Jack’s the planner of the group, the one who makes it his job to think every possible scenario through. Charlie’s good at improvisation and getting them out of trouble with her inventive gadgets. Slink’s the risk-taker who wings it more often than not and Wren is chafing against Jack’s protectiveness. But it’s Obi who gets them into the most trouble when they get involved with the race to control Proteus, the world’s most advanced computer.

In a very modern version of the Famous Five (minus Timmy the dog), the motley group are intelligent, resourceful and loyal. The adults have a touch of the James Bond villain about them, although no white cats are stroked! Peter Jay Black does a good job of making the story wholly plausible, despite some of the more outlandish elements.