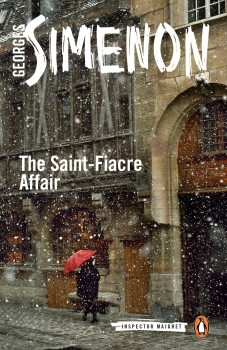 An anonymous message Maigret receives predicting a death during the mass on All Souls Day prompts him to return to the village in which he was born.

This is the 13th of the Maigret novels being republished by Penguin Classics and features the detective leaving Paris to pay a visit to Saint-Fiacre - the village in which he was born. The reason for his return is an anonymous note, sent to the Paris police, stating that a crime will be committed there during mass on All Souls' Day.

Maigret only half believes it but, unlike his colleagues, he is not prepared to dismiss it out of hand. That it is to take place in Saint-Fiacre, with all the memories the village holds for him, is a further incentive to make the journey. It is a long time since his last visit, which had been on the occasion of his father's funeral, and he can hardly believe the extent to which things have changed there.

The novel begins with his waking up (or rather being roused) at 5.30am. For a moment he cannot remember where he is but then he remembers that he has taken a room at the only inn Saint-Fiacre possesses, now owned by Marie Tatin. Maigret remembers her as the little cross-eyed girl from his childhood. She is now a spinster with an even more pronounced squint. She informs him, as she brings him hot water, that the first bell for mass has just rung and asks him if he is taking communion. Maigret thinks back to a time when, with no need to shave, he used to sleep a little longer and wait for the second chime at a quarter to six. He enters the church and instantly thinks back to his time as an altar boy and finds that he can still remember his responses to the priest's Latin prayers.

His nostalgic reverie is interrupted at the end of the mass, however, when an old woman whom he recognises as the Countess of Saint-Fiacre is found dead, sitting in her pew, her head in her hands. There appears to be no logical reason for her death and, as far as Maigret is concerned, there has been no crime in the normal sense of the word. From this point on he begins to realise that many things have changed over the last 30 years or so, the death of the Countess being a symbol of that change. She had been a tall, rather melancholy woman, an ever-present in the village, although rarely seen except in the grounds of her chateau. Now she is dead.

Maigret wouldn't be Maigret if he didn't find the reason for her sudden death and having found it, he concludes that somebody wanted her dead. There are a number of likely contenders, including her son, the new Count, who is a wastrel and spendthrift, her 'secretary' and lover, the last of a line of young men the Countess had employed in that capacity, and the local priest. There is a chapter towards the end entitled 'In the Spirit of Sir Walter Scott", though it has much more in common with the Agatha Christie habit of assembling all the suspects in the library. Here the mystery is finally ‘solved’, though it has to be admitted that the revelation of the ‘criminal’ is less than convincing.

This is not surprising because the presentation of the mystery isn’t very convincing either and the solution to it doesn’t seem to be the main aim of this book. We have all experienced that tugging at the heart strings when we have returned to the place we were born – the place from which we set out with the eternal optimism of youth and the knowledge that we would live for ever. When we return we can find ourselves thinking, “If I had done this or not done that life would have been so much better”. Others of us may begin to wonder why we ever left.

In Maigret’s case it is not entirely clear what his final feelings are but we are aware that, in some way or other, the experience has been cathartic. He has gained a greater knowledge of himself. Simenon’s first publisher told him that his novels broke all the rules associated with a crime novel and that he wouldn’t attract a thousand readers. It is because he broke all the rules, because he never forgot that he was writing about people, with all their hopes and disappointments, that he has attracted millions.