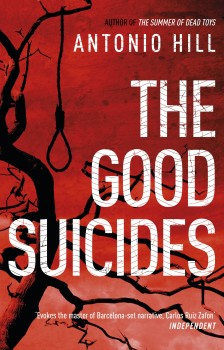 After a team-building event, one of the staff members kills his family before taking his own life. Three years later, another member of that event kills herself. It’s up to Inspector Salgado of the Barcelona police to find out why.

2010. Gaspar Rodenas kills his wife and young daughter before taking his own life; a brutal and shocking act that has far-reaching consequences, which result in the apparent suicide of Sara Mahler three years later.

Inspector Hector Salgado is dealing with his own personal crisis. His ex-wife went missing the previous year and they’ve been unable to crack the case, his relationship with his son is under strain and his position at work is tenuous after assaulting a suspect in a case of human trafficking. He’s under stress and unfocused when he’s handed the investigation into why Sara Mahler threw herself in front of a train one winter night, and why she has a photograph of dead dogs hanging from a tree on her phone, emailed anonymously, with the words NEVER FORGET.

Despite missing his own distractions, Hector quickly connects Mahler to a cosmetics company in the city, Alemany - the same company Gasper Rodenas worked for when he murdered his family and killed himself three years before. The deeper he delves, the more connections he makes, and soon he realises that a secret pact made at a team-building weekend may link Rodenas’ terrible and uncharacteristic actions, and Mahler’s suicide, and that a small number of Alemany executives may also be hiding the truth about that weekend. But someone else knows, someone who sent the photograph of the hanging dogs to each of them.

Antonio Hill weaves a rich narrative, that is in no way lost in translation, between disparate events and separate characters. In this second book in the series, the mystery of Salgado’s missing wife is investigated further by his sergeant, Leine Castro, supposedly on maternity leave but bored enough to continue working even if it is behind Salgado’s back. Meanwhile, the connections between the Alemany Cosmetics executives are woven as an intricate web of deceptions, mislaid trust and betrayal. Each of them, it seems, has motive and opportunity, yet each is turning on the others as the carefully constructed lies start to tear and the ugly truth is slowly, inevitably uncovered.

This beautifully written novel is a great thriller, an engrossing read, even for someone who hasn’t read the first book. Hill’s characters feel real; human beings with motive and drive, where nothing and no one is as simple as black and white, or good and evil. There’s a depth to the plot which is complex yet utterly compelling and in the end so bafflingly simple it makes the whole book a wonderful and rewarding read.