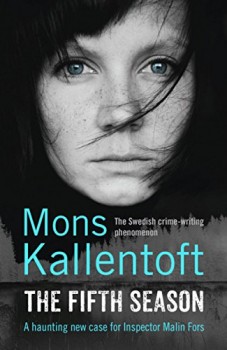 A woman’s mutilated body found in a forest shows signs of the most appalling torture. Inspector Malin Fors sees similarities to the case of a young woman found raped and beaten years before and still in a psychiatric unit.

Despite my doubts about the sanity of Detective Inspector Malin Fors – and a certainty that no officer who regularly gets absolutely wasted should still be in such a key post – I’ve enjoyed her dark journey through Linkoping’s year. But this episode goes far beyond the dark and brooding noir which made the earlier stories such huge sellers – and often appears little more than a male fantasy of sexual violence.

A family on a forest walk discover a woman’s mutilated body. The corpse is in amazingly good condition, although marks of torture are visible. Fors draws parallels between this case and that of a young woman found raped and brutally beaten years before who is still in a psychiatric hospital. When a psychologist tells Fors of yet another case, it all seems part of a bigger pattern. But why have earlier investigations been terminated or shelved – and who could benefit from a possible cover-up?

The obsessive Fors is, as usual, battling her own problems, trying to stay off the drink for her new man, while nervously considering his plans to start a family and wondering how such a move will affect her attempts to re-establish her relationship with her teenage daughter.

The parallel plots are good and generally well paced, although Fors’ connections with ‘the voices of the investigation’ often make it difficult to keep in touch with ‘live’ events. At one stage I was considering whether the years of drink had finally taken their toll and she was suffering from the DTs! ‘Listening’ to the victims is one thing, but when she starts to ‘see’ them as well you begin to seriously doubt her mental health.

Much the same applies to Kallentoft’s well-drawn cast of her colleagues, collectively introduced in the first book and carefully developed in the following stories. They, too, have fallen victim to the author’s need for more sensation – particularly Waldermar Ekenberg, the product of an abusive home and prone to physical violence, now of an increasingly advanced and brutal nature.

But if Ekenberg goes over the top, the details of the crimes against the women are just gruesome. The graphic descriptions of the extreme violence visited on them will make most readers uneasy – if not downright sick.

This book is about the exploitation of women – a point Kallentoft rams home relentlessly. And although Fors is apparently motivated by a desire to avenge them, after a time you begin to wonder if the excessively lurid and detailed accounts of their torture are not exploitative – pornographic violence purely for the sake of shock!

Fors has been a fascinating protagonist, but if she is to return, I hope it will not be in such a brutal episode which has none of the occasional humour of the earlier books to lift the gloom.

Noir I can cope with. Pitch black, no.