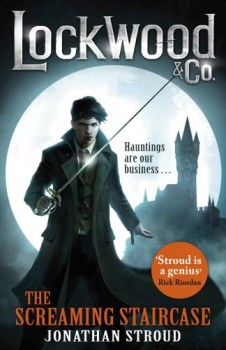 London’s most ramshackle psychical detective agency are on the verge of going broke and have no option other than to take on the case that no one else wants.

Fifty years ago everything changed. Ghosts – or Visitors as they became known – started appearing everywhere, leaving mayhem and death in their wake. The only people with the psychic abilities to fight back against the tide of malevolent spirits are children and teenagers. Agencies sprang up to counter the supernatural threat, mostly with adult handlers in charge, but Lockwood & Co are different. They operate on their own, without supervision.

Anthony Lockwood is charismatic, enigmatic and utterly deadly with a rapier. He lives and works in a large, rambling town house, previously owned by his parents, although where they are now, or what happened to them, is never discussed as Lockwood likes to play his cards very close to his chest. He’s assisted by chubby, scruffy, lazy sidekick George Cubbins, whose forte is research – and starting arguments. Their newest recruit is 15-year-old Lucy Carlyle.

When an encounter with a dangerous ghost causes a job to go disastrously wrong, resulting in major damage to the client’s house, Lockwood & Co face a damages bill that they have no means of paying. As a result, London’s most ramshackle psychic detective agency are forced to take on the case of the sinister Combe Carey House, reputed to be the most haunted and deadly in England.

Young adult urban fantasy is one of my favourite genres, and the start of Jonathan Stroud’s new series very much lives up to its promise. He effortlessly weaves an intriguing tale set in a strangely timeless era that at one moment seems Victorian, and at another, modern day. Rapiers are used against Visitors, yet at the same time there are cars, takeaway pizzas and the London tube system. There’s a Dickensian feel to the names and places, despite the occasional modernity, with a wonderfully appealing steampunk vibe to the whole thing that I absolutely love.

The story is told by Lucy Carlyle. Lockwood & Co’s newest recruit is a lively and entertaining narrator, her observations as sharp as Lockwood’s rapier. She’s also very Talented - with a capital T – as well as brave and feisty, taking no nonsense off either the argumentative and unwelcoming George or any of the various ghosts, spectres and other nasties she encounters in the course of her job. Lucy is a strong character who can throw salt bombs and magnesium flares with the best of them.

Lockwood & Co: The Screaming Staircase is fast-paced, stylish and great fun. There’s also a real sense of danger suffusing the book. Children - and adults - die in the course of their work and some of the descriptions are very ghoulish indeed. The characters are sharp and the plot is clever, with the various strands skilfully drawn together into a seamless whole. I guarantee that the climax will have you on the edge of your seat. If you liked any of Stroud’s other books, including the inventive Bartimaeus series, you’ll love this.