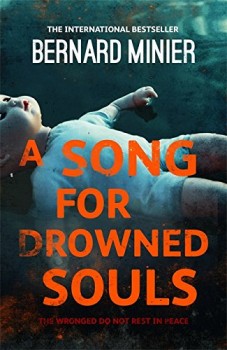 A Song For Drowned Souls

A young man is found at the house of a teacher, brutally murdered. His mother asks Commandant Servaz for help. Servaz fears that an escaped serial killer may have been involved.

Commandant Martin Servaz of the Toulouse Crime Squad receives a late night call from Marianne, a woman from his past, imploring him to aid her son Hugo, who has been found at the scene of a murder. He arrives at the house in the university town of Marsac, and finds the owner, Claire Dietmar, bound and drowned in her own bathtub.

Hugo is discovered dazed from alcohol and drugs by an outside pool, which is full of dolls. When it emerges that he was sleeping with his teacher Claire, the presumption of guilt is very strong. But a few details, including a CD playing when the police arrive, hint at the involvement of Hirtmann, a serial killer escaped from a high-security hospital for the insane.

This book follows Servaz’s first outing, The Frozen Dead, where he first meets the serial killer Hirtmann, with whom he discovered a shared passion for Mahler. It was the bleak winter landscape in the mountains which formed the backdrop to that book; here it is the brooding dark clouds of a stormy summer in the foothills of the Pyrenees. This is all at one with frequent references to the vulgarity and philistinism of modern culture and cynicism about politics and human motives in general.

As usual, Servaz is in a continual whirl of confusion, rushing from one dramatic development to another, with plenty of interrupted telephone calls and dangerous brushes with hostile characters. His mental equanimity is not helped by the fact that Marianne, an old flame, left him for Servaz’s contemporary, the sinister academic Van Acker, but now offers to reconcile, and the two are soon sleeping together.

Also familiar is the wide cast of colourful characters, including colleagues Irene Zeigler, a beautiful lesbian who rides a powerful motorbike, and Samira, a girl of French/Chinese/Moroccan descent, with multiple piercings and tattoos.

There is no shortage of suspects. As well as Hugo and his friends at the university, who are being spied on by Servaz’s daughter Margot, there is Van Acker, who is clearly up to something and hates Servaz. Ambitious politician Lacaze who was sleeping with Claire and refuses to disclose his whereabouts at the time of the murder is another candidate, and of course there is always Hirtmann, lurking in the background.

We know that Hirtmann is active because of periodic chapters detailing the torture of an un-named woman imprisoned for his entertainment. Her experience is not something that many people will find easy to read, and some will find gratuitous.

With so many characters to introduce and integrate into the plot, the book does take a while to get going. However, as with the first book in the series, the action is non-stop and the author throws everything in to ramp up the tension. I don’t think many readers will confuse this with real police work, but the author can’t be faulted for not using all possible ingredients at his disposal.