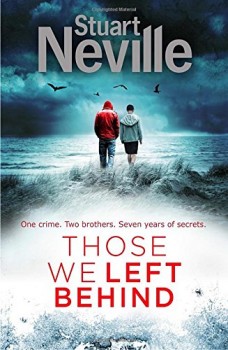 Those We Left Behind

DCI Serena Flanagan has just returned to work after breast cancer – and finds a nightmare case from her past come back to haunt her.

DCI Serena Flanagan has just returned to work after being treated for breast cancer. Colleagues aren’t quite sure how to treat her, and her efforts to take on cases from a cop who’s about to retire doesn’t look like they will go down well.

But then a traumatic case from the past returns to haunt her. Seven years ago, Ciaran Devine, then aged 12, admitted to murdering his foster father. Serena was never convinced of his guilt, and he remembers that she was kind to him.

Probation officer Paula Cunningham has the responsibility of easing the boy back into society – and it’s not helped by his loose cannon brother Thomas, who exerts an unhealthy control over Ciaran. As news gets around of Ciaran’s release, the tension is ramped up – and there will be more bloodshed.

Stuart Neville takes his usual Northern Ireland setting and paints it as black as night. It’s a dark and damaged place, much like his characters. One of the many strengths of his writing is getting inside people’s heads and focusing on memories and obsessions. For such a gritty writer, the occasional flash of woo-woo comes as a surprise – but is absolutely not out of place or overdone.

The plot of Those We Left Behind isn’t much of a surprise, but that scarcely matters, given the tension and menace conjured up by the writing. What goes on in the characters’ heads is often the stuff of nightmares and where the imagination can play scary tricks.

Where this book scores all down the line is in its unflinching examination of relationships and family. All the characters have their battles, from Ciaran and Thomas’s dysfunctional relationship, through Serena’s distance from her husband and children, Paula’s solitude, and the struggles of women suffering from breast cancer.

As a police procedural, Those We Left Behind works fine. But in reality it’s so much more than that – intense and precise character-driven writing at its finest.