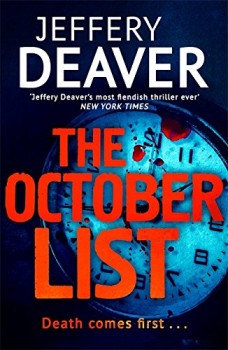 Jeffery Deaver has produced the ultimate Marmite novel – you’ll love it or absolutely hate it. And he blames listening to an interview with the lyricist/composer Stephen Sondheim for the idea where story starts at its end and goes backwards to the planning of the initial crime.

I suspect there is an element of author’s revenge here. After all, why should he struggle to produce a plot, people it, bring it alive, for someone just to sit on their backside, skim through it and think they could have predicted that. No, he’s going to make them work for their entertainment. His publishers have played along, with the title page and chapter list at the very last.

And work you will. As this clever, demanding standalone folds back into itself, the reader is forced to re-evaluate and reinterpret constantly shifting ‘facts’ – in other words actually play the detective and guess how the ‘present’ came into being. It’s almost a shell-game, a hunt the lady trick.

But, unlike the fast hands of the operators of those shills, the reader is never lied to. The best part of Deaver’s trick is that he continues to misdirect us into false assumptions and as the pace quickens, what appears solid evidence and carefully built characters unravel in an unnerving exercise in deception. Right up until halfway, it seems he won’t be able to cope with producing surprises back-to-front, but a dazzling series of twists continue to top each other until a final – or is it first – denouement.

Some readers who loved the Lincoln Rhyme series or the many other stories which were part of his progress to international recognition may find this reverse chronology too great an additional cognitive load. One of the benefits in writing ‘forwards’ is that characters appear and understanding of them grows. Here they spring up from nowhere to be introduced later. Those people will be in the ‘hate Marmite’ club.

Though it is difficult to keep track/predict events, as one becomes more familiar with the characters, it is just about possible with some serious concentration. That achieved, the book flows along as Deaver’s always brilliantly written stories usually do.

It’s pointless to try to summarise a plot backwards. Suffice it to say it starts/ends with a worried mother of a kidnapped child in a room with a bodyguard – and the arrival of the kidnapper. One clue, read the chapter headings before you start. Needless to say, they are at the back. Those and Deaver’s own pictures which illustrate each chapter, will at least point you in the right direction.

I’m in the pro-Marmite faction. This is a work of genius that repays hard work from end to beginning. But if you can predict the final/first twist to this enthralling story, you shouldn’t be reading, you should be writing your own best-seller! From a reviewer’s point of view, much as I loved this always clever and often gripping puzzle, I truly hope this style does not catch on!