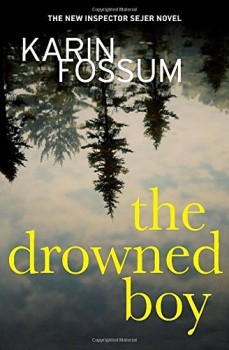 Chief Inspector Konrad Sejer is still grieving for the loss of his wife. And he cannot shake off the feeling that something is not right when he investigates the drowning of a small boy.

The original title of the book is Carmen Zita and Death (Carmen Zita og døden). And death is a theme running throughout the story, starting with Chief Inspector Konrad Sejer’s concerns about his dizzy spells and reluctance to see a doctor.

Sejer, anxious about his own mortality, still finds himself grieving for his wife who died of cancer several years ago. His dog Frank cannot replace a loving human being but eases the loss Sejer is experiencing every day. And although in his professional capacity Sejer is used to death, he cannot shake off the feeling that something is not right when dealing with the shocking case of a small boy’s drowning.

On a hot summer day the naked body of 16-month-old Tommy is found floating in a pond next to his house. He had Down’s Syndrome and had just learnt to walk. One moment Tommy was indoors with his mother Carmen, the next moment he was dead. His father Nicolai, fixing a bike in the basement, didn’t heard anything. Carmen tried to resuscitate Tommy but it was too late.

Sejer’s personal worries fade into the background while he and his colleague Jakob Skarre try to investigate why the toddler has drowned. The tragedy is unbearable for the young parents Carmen and Nicolai, 19 and 20-years-old respectively. Their marriage starts to crumble under the strain of accusations and excuses. Questions are asked as to why Tommy was left alone, how he managed to get to the water’s edge so quickly and why there was no fence around the property.

Each parent deals with their pain differently. Carmen Zita cries a lot but wants to forget about the loss of their son immediately, get on with her life and have another child. She seems resilient, strong-willed, almost too confident. She believes that her loving but overbearing father will help to soothe emotions and make a new life. Distraught Nicolai becomes withdrawn and petulant in the face of a bleak future. He drinks and shouts. Carmen is like a piano string, she never breaks, he says. And then he slowly reveals how difficult it was for his young wife to look after a child with Down’s Syndrome, and how life brought disappointment and resentment…

Sejer, a kind and thoughtful policeman, really wishes Carmen well; however, he finds her behaviour troubling, especially when another tragedy follows. Unknown to him Carmen honestly confides in her diary, which becomes a very clever device for the reader to understand her reasoning.

Karin Fossum’s writing is measured and subtle. The Drowned Boy deals with the family relationships, disability and the society’s reaction to people’s personal tragedy. This devastatingly sad and simple story is told in a touching manner. It’s not a thriller full of thrills and suspense but a moving and thought-provoking depiction of life in the face of death.