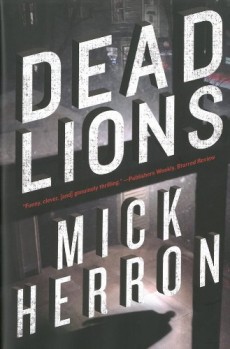 A former member of MI5 is found dead on a bus, apparently as a result of a heart attack.  An ex-colleague doesn’t believe it and sets out to investigate.

Dead Lions is the second book in a planned series of three about the inhabitants of Slough House in central London, the first, Slow Horses, having been a finalist for the Crime Writers’ Association Steel Dagger Award in 2010. Slough House and slow horses are associated by a pun which is deliberately not very good. Its inhabitants are members of MI5 – not the real Premier League MI5, which is near Regents Park, but its poor Division 2 relation at an outpost in the city. Slow horses is the name given to those members of the service whose careers have been blighted by an error of some kind.

Min Harper had left an important file on an underground train. In Catherine Standish’s case the error had been of a more personal kind – she had been an alcoholic. Possibly they might not have done anything wrong at all but had simply got in the way of a more ambitious colleague. They were given mainly routine tasks to do by their betters in The Park, the intention being that they would eventually be driven to hand in their resignations.

Mick Herron has a very neat way of introducing us to his characters. He imagines a cat entering Slough House from Aldersgate Street and moving from room to room up the building.  As it does so it encounters each of the denizens of the building, from the lowliest, Roderick Ho, the IT man on the ground floor to Jackson Lamb, the officer in charge of Slough House, on the third.

At the end of the book the process is repeated, but this time the intruder is a mouse. On this occasion it is noticeable that one of the occupants is no longer there. The reason for the absentee is the subject of the cat and mouse game with which the author presents us. It is a tale of events long ago as well of those of today, of old rivalries as well as new ones. It is a tale that is always absorbing, one not always easy to follow, but which retains the attention until the last page.

The events begin with the death of a former member of MI5, an old Cold War spy whom Jackson Lamb had known. Dickie Bough has been found dead on a bus near Oxford, apparently following a heart attack. Lamb, however, is not entirely satisfied with the result of the inquest and cannot understand why Dickie should be so far away from where he lived. He decides that further investigation is required and recruits another officer from Slough House to assist him.

At the same time the highly ambitious and untrustworthy Spider Webb from The Park orders two other occupants of Slough House to help him impress a Russian oligarch who he thinks, might be turned. The author gradually brings the stories together until we see - or we think we see - what is about to happen. The book is always greatly interesting but the last third is completely thrilling, largely because what happens is what we might have expected to happen, given certain references, but which still catches the reader totally unprepared.

The plot, however clever and well-worked it may be, is only part of a crime thriller and unless it is peopled with characters who come alive for the reader it can still appear somewhat mechanical.  There is no danger of that in the case of Dead Lions, however. Even the characters who are less involved, such as Catherine Standish and Shirley Dander, are vividly and convincingly drawn, and those who figure largely in the plot - Jackson Lamb in particular - are portrayed with such care that we know them completely long before the story is complete.

Another major aspect of the writing is the unforced wit and humour which the author brings to it and which seem always to fit quite naturally into context. We know quite a lot about Catherine Standish, for example, when we are told that she ignores cats because ‘having a cat is one small step from having two cats, and to be a single woman within a syllable of 50 in possession of two cats is tantamount to declaring life over.’  That is almost Austenesqe. It is perfectly obvious right from the start that Mick Herron is an unusually talented prose writer.  Combined with the skill and care for detail required in devising an interesting and convincing plot, the result is a quite exceptional crime thriller.