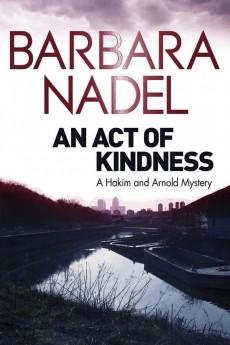 An Act of Kindness

In the east end of London, private investigators, Lee Arnold and Mumtaz Hakim are caught up in protection rackets, sex-trafficking and the problems caused by slum landlords and moneylenders.

This is the real EastEnders. Forget that idealised rubbish on the Beeb, full of implausible storylines where no-one ever swears – this is the raw unvarnished reality behind London’s shiny facade in the run-up to the 2012 Games. Barbara Nadel, an East Ender herself, has caught the harsh reality that lives in the shadow of Stratford’s shiny Olympic Park and the towers of corporate greed and conspicuous consumption that are the old Docklands.

One of my first jobs was as a district reporter on the East Ham edition of the Ilford Recorder – long before everything was rebranded Newham. I made police calls at Forest Gate nick, shouted for the Hammers and drank in the pub next to the ground. I knew the strong Jewish community and their Plashet Road cemetery. I also saw those dreadful signs on boarding houses: ‘No blacks, No Irish’ and heard the rantings of elderly supporters of the British Union of Fascists and the British National Party. Friends from those years who still live there say Nadel’s picture of modern life in multi-ethnic Upton Park, with all its social and cultural problems, is almost a documentary in its accuracy.

This is a book for those who like their crime with a social conscience. The central characters, former DI turned private investigator Lee Arnold and his Muslim partner Mumtaz Hakim, are a relatively new combination – and look set to become as popular as Nadel’s brilliant Turkish-based Inspector Ikmen series. Theirs is a respectful relationship on both personal and professional levels, with single parent Mumtaz unwilling to reveal the weight of gambling debts left by her abusive late husband, and Arnold unwilling to probe.

Nadel’s other characters are just as carefully drawn. Feisty DI Vi Collins, Arnold’s on-off lover, is an old fashioned thief-taker, her boss, Superintendent Venus, everything that is wrong with modern policing. How she must wish ‘Nipper’ Read and Bert Wickstead were still serving in the Met. If the villains seem over the top, I remember the Krays, the Tibbs and more.

Little has changed except the gangsters’ cultural background and we are given a horrific insight into protection rackets, sex trafficking and the problems of women trying to raise families, hounded by slum landlords and moneylenders and accruing or inheriting debts that can often be paid off by only the most demeaning acts.

These socio-cultural aspects more than make up for what is a fairly mundane plot and are interwoven with the central murder story and the lives and back stories of the main protagonists. The deliberately drawn parallels between PI Mumtaz and her client Nasreen, a wife with doubts about her husband, and who has formed a tentative friendship with a shattered Afghan veteran who is later found murdered, illustrates the strains of these women’s relationships with secretive and violent men, but constrained by their religious obligations in marriage.

This is a story about the London which Boris Johnson and all the other politicians hope you don’t see – as real as tomorrow’s headlines. It’s quite brilliant as are Hakim and Arnold.