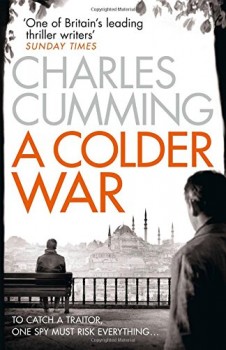 When the chief of Station in Ankara is killed in a plane crash, the Head of MI6 asks Thomas Kell to investigate. Kell, a previously disgraced agent, sees this as an opportunity to rehabilitate himself, but it soon becomes clear that a mole is at work.

The novel opens dramatically with Paul Wallinger, Head of Ankara Station, waiting, together with a CIA operative, for a vehicle bringing a high-ranking Iranian military defector to Turkey. The situation is very tense, particularly when they are informed that there has been a delay. Eventually, however, the vehicle comes into sight and they watch it until it is almost within hailing distance, at which point it explodes.

We switch to Istanbul - there is a lot of switching of places in this novel - to find Ebru Eldem, an investigative journalist responsible for a recent article critical of the Turkish Government. She is all set to enjoy the luxury of a day off when her apartment is suddenly invaded by the Turkish National Police who take her away, scarcely allowing her time to dress. Her request for a lawyer is refused and her only comfort is the thought that her boyfriend, Ryan, who has money and influence, will come to her aid.

Another abrupt switch, this time to the Ladbroke Arms in Holland Park, where we find Thomas Kell, MI6 agent in limbo. He spends four nights a week in the pub and both drinks and smokes too much. He desperately wants to get back into active service with the agency but he has been - quite unfairly - associated with an overly aggressive interrogation of an English national in Kabul.

That he had been instrumental in saving the life of Francois Malot, the son of MI6 Chief, Amelia Laverne, was not generally known within the agency and could not, therefore, count in his favour. Then he receives a phone call from Amelia to tell him that Paul Wallinger, who Kell knows had been her lover, is dead. She explains later that he has been killed in a plane crash and asks Kell to investigate the circumstances. Seeing another chance to retrieve his career, he agrees.

All this is contained within the first few pages but the novel then begins to proceed at a much more leisurely pace. When an Iranian nuclear scientist is assassinated in broad daylight in Tehran Kell is forced to the conclusion that a traitor is at work - a conclusion with which Amelia Laverne agrees. Both agree further that the quickest way to discover the truth about the death of Wallinger would be to find the mole and the remainder of the novel is devoted to that pursuit.

What this involves is a shortlist of possible traitors, both MI5 and CIA operatives, which is gradually whittled down until there is only one possible suspect. After that it is a question of recruiting a group of watchers and employing the necessary tradecraft to expose him. It is very clear – as it was in the previous novel – that Cumming has somehow acquired a knowledge of the detailed workings of the intelligence agencies and the reader is fully convinced of the authenticity of what follows as efforts are made to bring to book a man whose tradecraft is every bit as good as, if not better than that of those employed to watch him. In addition to this being authentic, it is also completely gripping and the attention is seized and held by it.

Both the main characters, Kell and Laverne, are very well drawn. Neither is particularly attractive. Kell’s wife has left him for another man and, though we are not told who was to blame for the break-up, it isn’t difficult to believe it was Kell when we see how totally committed he is to his work. There are times when it is clear that Amelia had loved Wallinger and is deeply saddened by his loss. Nevertheless, she does not allow her feelings to get in the way of her duty to find the traitor and mainly comes across as rather unsympathetic and calculating.

This book can be recommended to anybody who enjoys a good crime novel, but to those whose taste is the spy thriller it is almost required reading.