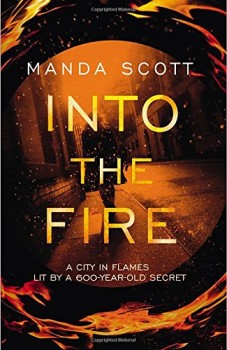 A man is found dead in the ruins of a hotel in the French city of Orleans. Police captain Ines Picaut has to find out what links him to France’s most famous heroine, Joan of Arc, who’s been dead for 500 years.

A man is found dead in the ruins of a hotel in the French city of Orleans. Police captain Ines Picaut and her team have to find out what links him to France’s most famous heroine, Joan of Arc, who’s been dead for 500 years. So rewind to the 15th century when the English and French were the best of enemies …

Here we find Tod (when he’s English) or Tomas (when he’s French) Rustbeard, a soldier who changes his allegiance more often that he changes his war-stained clothes. As the book opens, he’s serving under the Duke of Bedford and doing his best to kill The Maid, this she-devil leading the French attacks. But before long he’s gone undercover with the other side (he’s half-French) in an attempt to find out who this mysterious woman really is.

Back in the present day, there are more arson attacks, but Ines isn’t certain that an Islamic group is really behind them. The full media spotlight is turned on her – not only because of her police work, but also because she’s married to (albeit estranged from) the glamorous Luc, who has serious political aspirations, and the weight of Orleans’ version of a mafia family behind him.

Manda Scott handles the jumps between the 15th and 21st centuries absolutely seamlessly – and they never slow the action up. Ines and her team, aided by the computer whizzkid Patrice, uncover intriguing links with a British academic and Ines’ late father, who had controversial views on who Joan of Arc really was. Tomas, meanwhile, slugs his way around the battlefields of France in gut-churning technicolour, and works his way into the Maid’s circle of advisers.

I haven’t read anything by Scott since her lesbian vet series from nearly 20 years ago. I liked that well enough from what I can recall, but Into The Fire is on another level completely – it’s a brick of a book, but the pace never falters. Scott weaves together a thriller ‘save the universe in 45 minutes’ plotline with the compelling historical narrative and what is never in any danger of being a bog-standard police procedural.

Scott’s afterword outlines how she has based her theories on an article from a Ukrainian surgeon. She also recommends additional reading on Joan of Arc. If your only knowledge of the story is via George Bernard Shaw’s St Joan, now’s the time to remedy that with a book which combines historical intelligence with top-notch genre action. Into The Fire deserves to be widely read and talked about.