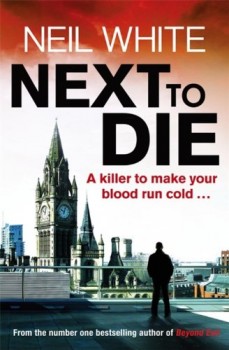 Neil White seems to be off for pastures new, leaving behind HarperCollins, together with crime reporter Jack Garrett and his girlfriend, police office Laura McGanity, for a new home and a new series with Sphere.

Next to Die introduces two new main characters, Joe Parker, a criminal defence lawyer in Manchester, and his brother Sam, whose job it is to catch the criminals his brother subsequently acts for. The two brothers are very definitely on the other side of the tracks to each other and the tension between them is clear from the start.

The refreshing thing about the Parker brothers is that neither of them is portrayed as anything terribly unusual. Joe isn’t the senior partner in his law firm, he’s just another solicitor struggling with the need to bring in fees and keep his billable hours up. Sam isn’t a DCI or even a DI, he’s just a simple copper working on fraud cases and hoping for something more exciting to crop up. But when it does, he finds that getting your wish can be a dangerous thing. There’s no way of dressing it up; Sam is being asked to spy on his own brother.

Joe has been asked to represent Ronnie Bagley, suspected of murdering his wife and child. But the only problem is that there’s no sign of their bodies and getting a conviction by fair means seems an unlikely prospect, so Sam’s superiors are quite happy to follow another route. And Ronnie Bagley isn’t the only fish that Manchester’s murder enquiry team has to fry. Women are going missing in the city and then turning up dead, bringing back unwelcome memories for both Joe and Sam of their younger sister’s murder.

White’s knowledge of law firms in Manchester is very apparent to anyone who has ever had dealings with solicitors there – or indeed anywhere. He paints a convincing picture of both lawyers and police officers alike. The plotting is strong and not over-complex, which comes as a relief after some of the more convoluted stories in this genre. White knows how to ratchet up tension and deliver a well-paced and satisfying story. Joe and Sam Parker will no doubt be making a return and that’s no bad thing.