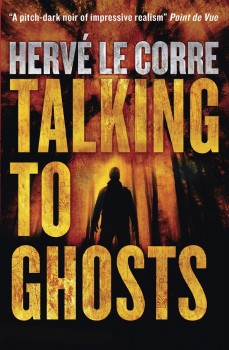 Commander Vilar's son has been missing for some years. His wife has left him because of his refusal to accept that he is probably dead. He tries to carry out his tasks as a policeman but his missing son is always at the front of his mind.

Commander Vilar's son has been missing for some years. His wife has left him because of his refusal to accept that he is probably dead. He tries to carry out his job as a policeman but his missing son is always at the front of his mind.

As the book opens we find Vilar in his car parked next to a junior school. We learn from the thoughts passing through his mind that he is desperately hoping to apprehend the man who, he feels, must have abducted his son. We realise also that this waiting for a man who will never appear is an indication of Vilar's having failed to come to terms with the loss of his son, that he is still deeply disturbed by it and that his performance as a police offer is likely to suffer. However, he still has to do the job and he is soon investigating the case of a young boy who has returned home to find his mother - his sole parent - brutally murdered. Thus we are presented immediately with two similar situations - a man who has lost his son and a son who has lost his mother.

The author uses the technique of devoting alternate chapters to Vilar and his progress with the case and Victor (the boy) and his attempts to make a new life for himself. Vilar clearly is drawn towards children in need and his initial contact with Victor demonstrates feelings of a kind that a policeman does not normally show. He can understand Victor's panic as he tries without success to remember what his mother looked like. After the funeral Vilar doesn't see the boy sobbing over the urn containing his mother's ashes, but if he had he would have sympathised completely.

So great is the author's desire to express trauma which the boy is suffering that he uses all kinds of images in the attempt to do so, some of which seem rather forced and inappropriate. He is described as frequently sweating, nauseous, staring into space, existing in a void - all of this at great length, the result being that the story almost comes to a halt on occasions. The same preoccupation with Vilar's state of mind, following his trauma, is evident. On one occasion he imagines himself an astronaut cut loose from his ship, drifting endlessly. He feels his head reeling and the ground beneath his feet turning into a quagmire. As with Victor, there is frequent nausea, bile and vomiting. It would be excessive if it were reserved for one character but, when the author goes through the same list for the other main character it makes for dull reading.

Nor does the plot itself retain the reader's interest. One might expect - since this is, after all one novel - that the two stories of Vilar and Victor might come together to allow some kind of unity. However, apart from the fact that one character appears in both - rather unnecessarily in the Victor story - there is little connection between them. An attempt is made to introduce a love interest into Victor’s story but, although a 13-year-old boy might find it wildly exciting, the reader is unlikely to do so, particularly as it appears to lead to no conclusion. Those parts of the book devoted to Vilar’s attempts to find a killer are fairly routine police procedural, but it is all rather laboured.

All in all, for a book which has won prizes in France, it is rather disappointing. There is no question that it begins very well and sets out Vilar’s situation very dramatically. Similarly, the initial description of the effect on Victor of his mother’s brutal murder is excellent. However, the author goes too far in his attempt to describe realistically the traumas of both main characters and in the process the thriller aspect of the novel receives too little attention.