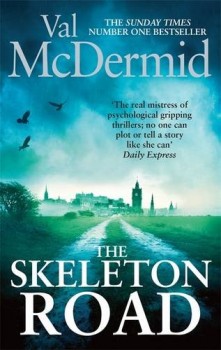 When a skeleton is discovered at the top of a long-disused building, the neat hole in the skull makes it clear that this wasn’t a case of accidental death. Cold case specialist DCI Karen Pirie is called in to investigate.

Val McDermid turns her back on her usual series characters for what seems to be a standalone story, but one with definite series potential. DCI Karen Pirie is a cold case specialist, so when a man’s body is discovered high up in a long-disused building in Edinburgh, she’s the one who gets the call. The cause of death isn’t too hard to determine. The bullet hole in the man’s forehead is a bit of a clue that even the dullest of police officers would have trouble missing, and Karen Pirie is anything but dull.

The early chapters quickly pulled me into the story with some fascinating insights into the role played by forensic science in teasing out clues even in the most difficult of circumstances, without ever turning into a simple episode of CSI.

The story moves back and forwards between past and present, changing perspective from the police officer to the academic, in the person of Oxford academic Professor Maggie Blake, a woman who built her career on the most recent Balkan conflict. Both are strong, independent women who forge a real, but fragile bond over the course of Karen’s investigation.

Maggie is still haunted by the disappearance eight years ago of her lover, former Croatian general, Dimitar Petrovic, known to his friends as Mitja, whereas Karen is in a stable relationship with fellow police officer Phil Parhatka. The story of Maggie’s relationship with Mitja is interwoven in a series of deeply personal first person narratives that go deep behind the scenes of the war-torn former Yugoslavia. The siege of Dubrovnik in particular is told in harrowing but understated detail, bringing the conflict and those engaged in it to life in a way that news reports strive for but seldom achieve.

The Skeleton Road proves time and time again that in war there is no black and white, no absolute heroes or absolute villains, only many, many shades of grey, some darker than others. The revelations, when they come, are shocking, and I was left thinking back to the days of Slovenia’s ten-day war, when a friend of mine, an academic like Karen, had to resort to a motley collection of weapons from two world wars, stored in his grandfather’s attic, to help defend his village from the advancing Serbian army.

I spoke to him on the phone that day from my safe haven here in the UK, and it brought home the situation of ordinary people caught up in extraordinary events in a way that nothing since has ever matched. Val McDermid skilfully captures that same atmosphere throughout The Skeleton Road. This is a book that will stay with you long after you turn the final page.