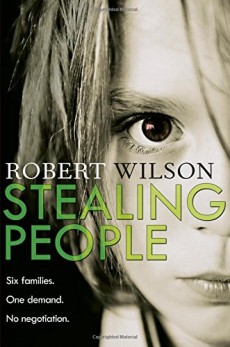 A series of kidnaps strikes deep at the heart of the lives of the rich and powerful, with a £25 million price tag on each life.

This is the first time I’ve made the acquaintance of either Robert Wilson or his new series character, Charlie Boxer, and that’s an omission I’m very pleased to have rectified.

Boxer runs a charitable foundation called LOST, which does what it says on the tin. He tries to find missing people. Boxer is approached by Siobhan, the complex, seemingly mercurial intersex daughter of Conrad Jenson, a man engaged in the shadowy world of private military contractors involved with the US government. Siobhan wants her father found and she insists that Boxer is the person to do it. He’s known to be a man who gets the job done and is prepared to be ruthless in pursuit of his objectives.

At the same time, a daring and very well-organised gang of kidnappers strikes several times in the space of 32 hours. The victims are all the children of the super-rich and super-powerful. Their parents aren’t used to being powerless in the face of a gang who make demands with an almost impossibly tight timescale for compliance, refuse to negotiate except through one channel and seem prepared to torture children without any qualms.

Their demands start out as deceptively simple. They want £25 million per hostage, but as ‘expenses’ not a ransom, and it’s not clear whether the hostages will be released even when the initial expenses payment is made.

Coming new to the series, it wasn’t difficult to pick up Boxer’s backstory. His ex-wife, Detective Inspector Mercy Danquah, is putting her career on the risk on the line through a relationship with big-time fence, Marcus Alleyne. Mercy and Boxer have a daughter, Amy, who’s been doing some work with her father’s foundation following a kidnap that put her own life at risk. She’s fascinated by Siobhan, a bit like a rabbit succumbing to a rather beautiful stoat, and the pair of them are targeted, as is Alleyne, to put pressure on Mercy, who has been given the job of liaising with the victims’ families.

Boxer is in a committed relationship with Isabel, who drops something of a bombshell on him when she comes back from a trip abroad. She’s is one of the few characters in the book I didn’t feel I got to know well, which somewhat lessened the impact of certain plot developments. I think I would have had more of a connection with her if I’d seen more of their relationship in earlier books. But despite that, Wilson’s characters are well drawn, and he handles a large cast with admirable dexterity.

The action is fast, complex and at times very, very unexpected. The story gets off to an intriguing start with the series of kidnaps and doesn’t lessen its pace. Boxer is ruthless and prepared to step well onto the wrong side of the tracks when needed, but never becomes the testosterone-fuelled macho man of all too many thrillers, even when he’s threatening to apply boiling water to someone’s groin.