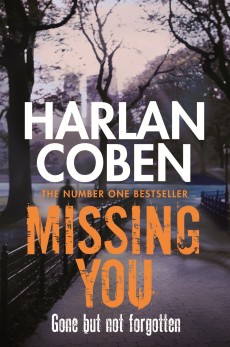 NYPD detective Kat Donovan decides to brave online dating, only to stumble across the profile of her ex-fiancé who broke her heart 18 years ago. He doesn’t seem to remember her, then becomes a suspect in a potential abduction.

Harlan Coben is one of the true modern masters of twisting tales where ordinary people are caught up in extraordinary events, where sinister machinations and secrets from the past erupt in the present.

In Missing You one of the main characters is in fact an NYPD detective, but this story is not so much a classic cop-based crime novel as a thriller where a number of everyday people get caught up in something very dark and dangerous. It’s not her job, but Detective Kat Donovan’s personal life and her past that pulls her into a troubling situation, when she sees her old fiancé on an online dating site. Over the past 18 years she’s thrown herself into her career, trying to bury multiples hurts and heartbreak deep down. A friend’s pestering gets her to dip her toe into the romantic waters again, but Kat’s past resurfaces in the most bizarre way.

At first, Kat is stung when her old fiancé seems cold to her contact. Is she such a distant memory that what they had all those years ago doesn’t matter at all any more? Then when a young man comes to her saying his mother has gone missing – she was apparently heading away on a romantic holiday with Kat’s ex, having met him on the dating website – the pieces don't quite seem to fit. She needs to know what's going on, but the deeper she digs, the more it seems like the cover stories and obvious realities aren't quite right.

Coben spins a gripping yarn, drawing the reader in and making the pages whirr as the story twists upon itself and the reader comes face to face with some very evil people doing some very evil things. There are plotlines and themes both broad and personal as Coben takes us on a heck of a ride. Kat is forced to confront a lot of things she’s put away, and face darker truths about just what happened when her father died and her fiancé vanished all those years ago. Coben does a brilliant job making us care not only about Kat, but also many other characters involved in this tale – characters who are unique, quirky and memorable, while never being caricatures or ciphers. They’re more than their quirks, deeper, and we can connect with their humanity.

Coben has set a high standard over the course of his career, and while this book may not reach the peaks of his very best work, it is still an intriguing and enjoyable tale that powers along, inviting the reader to care as we ride along with Kat and the others, prodding our hearts, not just our ‘who’s behind this’ curiosity.

Chilling and very dark in parts, Missing You is compelling storytelling from a true master.

Craig Sisterson is a lawyer-turned-journalist from New Zealand and the founder of the Ngaio Marsh Award.