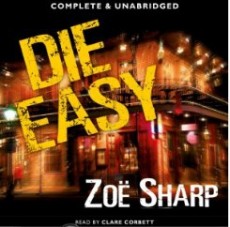 In the early days, I reckoned Zoe Sharp's books were Lee Child wannabes. But it soon became apparent that they were more than that. Sure, there was an action hero who rapidly ended up in the US, but the surrounding cast set them aside from the archetypal loner. A series that started well has really grown and matured. As thrillers, they're never less than rattling good reads with solid plots. But Sharp's characters are real. They face challenges, both emotional and physical.

And Charlie Fox has definitely been put through the wringer, from being booted out of the army to seeing her partner Sean seriously injured. Now Sean is back working, but with huge gaps in his memory - including his recent relationship with Charlie. And this means he thinks she's still to blame for ruining their army careers. Much worse, though, is the return of a very unwelcome face from their past, who seeks to exploit Sean's injuries.

It's much against Charlie's better judgement that Sean is working with her on a protection job in New Orleans. It's guarding a rich client at a celebrity fundraising event for the city ravaged by Hurricane Katrina. But what should be a fairly straightforward job turns into a hostage situation where the gaps in Sean's memory prove vital.

I was left feeding disks impatiently into the machine to find out what happened. Sharp's storytelling is no-nonsense and stark, and she moves her plot along at a terrific lick. At times the tale teeters on the edge of becoming One Damn Thing After Another, but the raw energy of the flashpoints keeps it on the right side.

Narrator Clare Corbett throws in a colossal range of accents from the large and hugely varied cast which stretches from hulking bodyguards to southern belles. Ironically, this is a female narrator who seems to do best with the male voices, from Sean's flat northern tones to the flamboyant New Orleans accents. She certainly goes to town on them with more success with some than others. Charlie is too posh for a start - this is a character from a well-to-do background who would certainly have toned down any accent to fit in.

One odd glitch which bothered me, and which it's difficult to be specific about without giving away a major spoiler, is why didn't Charlie use what was in her pocket? But it's giving nothing away to say that Charlie's roller-coaster life looks set to be disrupted again.