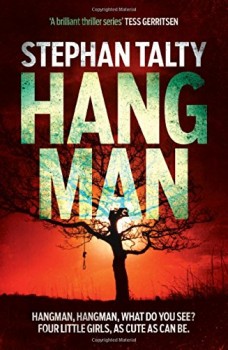 A serial killer murders a prison officer and returns to the scene of his crimes to kill again. Detective Abbie Kearney must somehow halt his rampage.

When a serial killer who targeted only dark-haired teenage girls from the town’s richest community murders a prison officer and escapes during a transfer between jails, Buffalo is thrown into a state of terror when he returns to strike again.

Marcus Flynn, nicknamed the Hangman, was convicted of three deaths – but the fate of his final kidnap victim remains a secret he has nurtured during his four-year incarceration. Homicide detective Abbie Kearney, a daughter of the city’s tough Irish stronghold known as The County and whose late father was regarded as a police hero, has already made her name as a gritty, independent cop – and because she had no involvement with the original case is given the task of answering the grim rhyming question used to frighten children: ‘Hangman, Hangman, where do they go? Down in the ground, where the daffodils grow. Hangman, Hangman, what do you see? Four little girls, as cute as can be.’

Stephan Talty’s debut novel Black Irish was also set in his hometown in upstate New York. Near Lake Erie and the Niagara Falls, at the start of the last century it was home to more millionaires than any other American city.

In crumbling decline since the end of the last war, one of the few things which has not changed is its close Irish community. The secretive County, like parts of Chicago, Boston and New York, still regards the neighbourhood as part of the mother country – and even in the modern PC era, all proper cops are still big, Irish and male!

Talty’s characters have reality and smart, credible dialogue. The descriptions of Buffalo, where America’s new poor white underclass gaze with envy at the surviving rich residents of the town’s North suburb make the story even more credible. The pace is snappy, his characters have reality and he handles the dark business of the killings with a confidence which serves to minimise their sheer brutality.

I criticised the ultra-professional, smart, Abbie on her debut for allowing herself to slide into sentimentality which affected her judgement – but this time Talty has her just right. There’s still regret that she did not understand her father better – and very real doubt if she should compromise her principles and make use the ‘Murphyia’, that secretive, close-knit collection of Irish ex-cops, city officials, businessmen and even priests which effectively runs so many American cities through a combination of graft and brutality and of which he was a legendary part.

Desperation at a case which, it seems cannot be solved by strictly legal means, forces her to deal with one of its leading members – a former detective who was the original case officer and whose failure to find the fourth girl still haunts him.

Talty’s crisp, no-nonsense style, mixed with enough dark humour to balance the violence, is both realistic and riveting. Hangman is a dark, powerful read which establishes the first generation immigrant from County Clare among the best of a new generation of American crime writers.