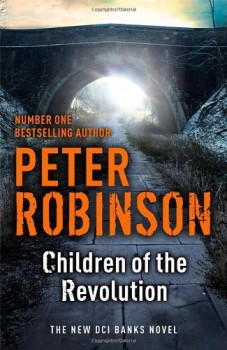 Children of the Revolution

DCI Alan Banks finds that the death of a recluse has links back to the student unrest of the 1960s.

A man is found dead beneath a deserted railway bridge. He turns out to have been a disgraced college lecturer who was sacked for improper advances to female students. Since then he's been living in poverty in the back of beyond - so why does he have £5,000 in his pocket?

The 21st book in the DCI Alan Banks series has Peter Robinson returning to a theme he's used in the past - how events of the 1960s and 1970s impact on the present day. Those of you of a certain age will of course have spotted that the book title is also a T.Rex song. And the plot harks back to student unrest at the then new universities where it turns out that the dead man kept some unusual company. Mind you, you'd be hard-pressed to get membership lists for student union groups now, let alone 40 years ago!

The book isn't one of Robinson's best, and definitely not one to start with if you're new to the Alan Banks series. Banks has always been a low-key and undemonstrative main character, which, ironically, is one of the reasons the series has seemed realistic - this is a working cop, albeit with a maverick bent, and not superman. My theory is that that's why it took TV a long time to pick up on the books - and why they've ended up with so-so adaptations (Stephen Tompkinson isn't how I imagine Banks) and by having to make the lead character a bit too free with his temper and his fists (neither of which is Banks in the books).

That said, Children of the Revolution is low on the personal angst that has dogged Banks in earlier books, although there are hints that his style might be out of sync with modern policing. And it's pretty slow as well - Banks ambles around, interviewing everyone from college lecturers that time forgot to toffs in their grand houses. Annie and Winsome, both strong though often overlooked characters in their own right, stay in the background, and new girl Gerry gets her head down over her computer.

Robinson is an always reliable plotter who generally plays fair with the reader. And I was intrigued enough by the plot to carry me over the slower sections of the book. Children of the Revolution's air of understated, quiet melancholy is a welcome contrast to the squealing brakes and flying fists of many police procedurals.