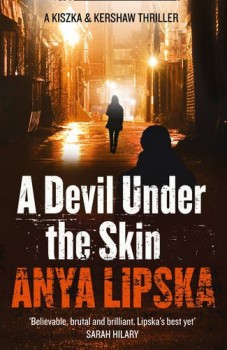 A Devil Under The Skin

Janusz Kiszka is your man if you need a fixer in London’s Polish community. But this time his investigations are too close to home as he searches for his missing girlfriend Kasia.

It seems faintly bizarre to describe this gritty urban crime novel as a delight. But that’s what it is – even if it does pack a hell of a punch at the end.

Janusz Kiszka is a battered knight on an even more battered charger – his best mate Oskar’s temperamental white van. If you need a fixer in London’s Polish community, he’s your man. This time, though, his investigations are too close to home for comfort – his girlfriend Kasia has disappeared just days before she was finally due to move in with him.

She’s a good Catholic girl and maybe she’s had second thoughts about leaving her abusive husband. Janusz, though, is sure she’s in danger. And as he starts asking questions, a series of killings (gruesome always seems a cliché, but it’s true in this case) dogs his steps.

As usual, he receives help of a sort from PC Natalie Kershaw. She’s got time on her hands, as she’s on medical leave after an ill-advised stint with the firearms team, and isn’t enjoying the obligatory appointments with the shrink.

Anya Lipska is a natural storyteller, but the characters really make this book – and the author’s affection for them shines brightly. It’s not a huge cast, but tiny details stick in your mind, such as the Russian guy and his cat, and Janusz speaking English with a posh accent picked up from a childhood of watching war films. I shall be most peeved if Lipska doesn’t bring back the elderly computer whizz in future books. And I’m rather fond of DS ‘Streaky’ Bacon, Kershaw’s old sergeant, who seems to wield rather a lot of influence …

Lipska balances humour and grit very judiciously. There’s a hilarious scene with Janusz and Oskar at a health spa – and shortly after you’ll be twitching nervously as Janusz starts snooping around the grounds in the dark.

Ignore some point of view wobbles – this is a must-read series. If necessary, you can pretend you’re doing your bit for Anglo-Polish understanding. Well, the descriptions of Polish food (Janusz is a dab hand in the kitchen) will make you hungry, and you’ll learn an impressive range of swear words!