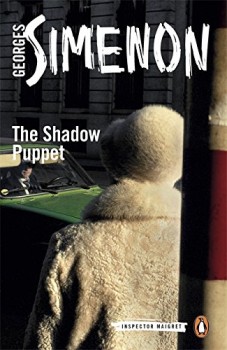 Maigret is summoned late at night by a telephone call from the concierge of an apartment block in the Place des Vosges. She tells him that a man is dead and that she suspects murder.

Maigret is summoned late at night by a telephone call from the concierge of an apartment block in the Place des Vosges. She tells him that a man is dead and that she suspects murder. When Maigret arrives he finds that she is correct.

The murdered man was Raymond Couchet, who lived in the block and was the owner of a laboratory attached to his apartment. He had been shot in the chest at close range whilst sitting in his office. The concierge tells Maigret that she had not informed the local police because one of her more important tenants was expecting a baby imminently and she feared that there might have been too much noise. She seems more concerned with Madame de Saint-Marc and her baby than with the murdered man.

Whilst he is there Maigret comes across a young woman called Nine who admits to being Couchet’s mistress. She had been a dancer at the Moulin Bleu and lived at the down-market Hotel Pigalle. Maigret has the impression that she is wanting to cry but hasn’t yet had time. When he asks her what she does now she says simply, "I am with him".

Maigret realises that she had been very fond of the dead man and immediately takes to her. From what she says it becomes clear that Couchet had been a good, generous man who had treated Nine very well - perhaps too well. He had always provided her with what she needed and if she had any criticism of him it was that he was over-generous, and not simply to her.

This is one of those Maigret novels where the people assume a greater importance than the solution to the crime and Simenon provides the reader with very incisive descriptions of them. For example, the concierge, Madame Bourcier, clearly knows her place and speaks almost reverently of Monsieur Saint-Marc and his wife. She feels it is her responsibility to make their comfortable life even more comfortable. Saint-Marc himself is a former diplomat and arrogantly dismisses the nouveau riche Couchet as vulgar. "In other words," says Maigret, "he was working class. He had struggled to become successful."

After taking the trouble to describe his characters so well for us, Simenon is all set to tell us a tale in which the crime arises from defects in human nature – defects which we meet every day and which we regard as simply part of the routine failures of mankind. There are occasions, however, when they can be so pronounced that they cannot be so easily dismissed, when they assume proportions that make them dangerous - in this case fatal - to others.

Simenon is so good at making us look at ourselves at the same time as we look at others. Maigret has to solve the crime and in order to do so - without most of the advantages conferred by modern forensic science - he makes use of his knowledge of the human personality. This is particularly true in The Shadow Puppet, where we find that the crime is caused by frustrated ambition, greed and a complete inability to make allowance for the failings of others.