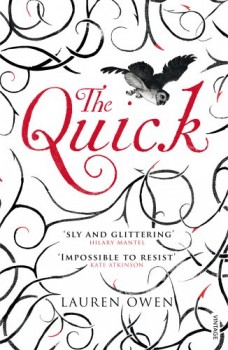 When Charlotte Norbury travels to London to find her younger brother who has disappeared, she finds herself involved with a mysterious vampire society.

Lauren Owen’s macabre and atmospheric debut tale of love and loss in Victorian London may sharply divided readers. Some will love this multi-layered saga which combines adventure, horror and romance in a fantastic world of her own construction. Others may be baffled by the swift, brutal change of pace and structure, the introduction of a new cast of none-too-pleasant characters and what at best can be described as a slightly ambiguous and confusing ending.

Whatever your judgement, Owen has produced a clever, compelling and at times quite horrific, but always readable, gothic fantasy.

The motherless brother and sister James and Charlotte Norbury are raised largely by a parade of governesses in a huge, rambling house in the wilds of Yorkshire. Left to their own devices and dependent on each other, Charlotte assuming an almost maternal role towards her younger brother. They invent ‘ordeals’ – one of which involves a priest hole.

James, a would-be writer, studies at Oxford and goes on to London where he meets the louche Christopher Paige. Owen’s exploration of Victorian homosexuality is particularly interesting and provides what is to be the first twist to her narrative.

The pair are attacked. James disappears, while his lover is murdered. Charlotte, until then quite feminine and passive – a typical young Victorian lady – is determined to look for him. She soon discovers he has been taken by the mysterious Aegolius club – and is no longer the brother she knew. She sets out to rescue him and finds herself in a dark underworld which she could never have imagined, but also unites with others who wish to destroy the evil club. That’s the most vicious twist. The Aegolius Club is for vampires – the undead – who refer to the living as The Quick of the title.

The cast of Owen’s plot increases dramatically from this point. Enter Adeline and Shadwell, both with reasons for becoming vampire hunters – numbers of the undead, downright spooky or not quite believable in varying degrees – and the enigmatic notebook entries of Augustus Mould, a sort of scientist-researcher for the Aegolius Club.

Charlotte’s quest to rescue and ‘cure’ her brother subsumes her life. But as the siblings’ sad destiny plays out, she finds love and support – and her solution takes them full circle back to the old house where they grew up.

This is a fine, if complicated, introduction to Owen’s talents, although if you’re of a nervous disposition, it’s probably best not explored last thing at night! There’s enough wriggle room at the end for a possible follow-up – and it will be interesting to see what she produces.