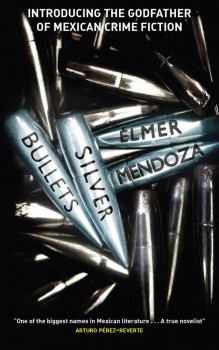 Mexican detective Edgar ‘Lefty’ Mendieta investigates a murder – there are plenty of suspects, but the use of a silver bullet is something new.

By 2006, the trafficking of narcotics had transformed Culiacan, Mexico, into one of the world’s most violent cities, shootings plentiful and every morning the discovery of ‘gangsta-wraps’ - dumped blanket-shrouded bodies. Such deaths are passed to the police narcotics division with no hope of resolution, given the resources at the command of the drug lords.

Detective Edgar ‘Lefty’ Mendieta steps gingerly within this environment to investigate the murder of Canizales, the lawyer son of a man lobbying for high political office, who had an adventurous social life with both sexes, including the daughter of a drug baron. Lefty is constrained from the start given the power of the parties involved, and is soon told that the investigation is officially over. But further deaths follow, and he can’t let it go.

Lefty in fact enjoys a fair degree of autonomy in his work, and although only a lowly detective, he enjoys a reputation for integrity which gains him a foot in the door, and the help of old friends in key positions within the police. Typically, when his partner Zelda Toledo is transferred to Traffic, he storms in to secure her return. Inside, Mendieta is in turmoil over an affair with Goga, who blows hot and cold, but he comes across as a very decent man.

The most prominent stylistic feature of the book is the lack of quotation marks for speech, with a change of speaker not even signified by a new line. Lefty gets constant phone calls and often several exchanges follow before the speaker can be identified. The result is frequent confusion and the need to go back to ensure full understanding. Coupled with the tendency for paragraphs to often exceed a page in length, and the multiplicity of names, it has to be said this is not the easiest book to read.

One interesting facet is Lefty’s occasional reference to music, frequently music that is familiar, such as Elton John and Marmalade. At one point he muses on Like a Rolling Stone (Dylan), To Love Somebody (Bee Gees) and Proud Mary (John Fogerty), claiming they are all Jagger/Richards compositions. It is unclear as to whether this a joke about the protagonist or on the reader. While the translation is excellent, it is difficult to avoid the feeling on occasion that some of the observational subtleties on life in Mexico are lost to foreign readers.

Élmer Mendoza is widely regarded as the founder of ‘narco-lit’ exploring drug trafficking and corruption in Latin America. The permeation of the drug business into normal life is well depicted in this book, and conveyed with delicacy through the thoughts of the characters. Mendieta is a sympathetic protagonist too. It is only literary style that is likely to hinder the book enjoying a wide readership.