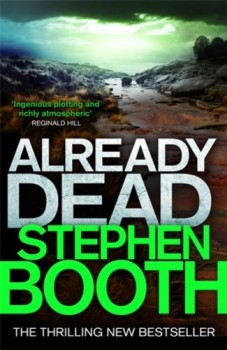 The Peak District is drenched in rain and a naked body is found in a drainage ditch. DS Ben Cooper is still off work after the arson attach that killed his fiancée and DS Diane Cooper has her work cut out to keep his private life out of her investigation.

In Stephen Booth’s long-running series, the Peak District itself always plays a prominent role. In Dead and Buried, the previous book, heath fires were sweeping the area, but here in Already Dead, the weather has gone from extremely dry to extremely wet, with non-stop rain flooding roads, causing car crashes and filling drainage ditches.

When a body is found blocking one such ditch, the circumstances of the death are deemed suspicious, especially since the corpse is naked, clothes piled up nearby in a small wood, complete with wallet to ease identification. Detective Sergeant Diane Fry has to find out how local man Glen Turner, who worked in insurance and lived at home with his elderly mother, came to be found like that. But with rising water levels, the crime scene investigation is a complete nightmare.

To add to Fry’s problems, her colleague DS Ben Cooper is still on leave following the tragic death of his fiancée in an arson attack on a deserted pub, in an attempt to conceal a murder. Cooper is having a hard time adjusting to his girlfriend’s death and everyone, including his elderly neighbour, is worried about him. But when her other colleagues decide to take a hand in matters and check up on him, Fry is decidedly uncomfortable, especially when they decide she’s the best person to make the approach.

It’s quite clear that Diane Fry is not at ease with any attempts to get close to the still-grieving man. In fact, it seems like Fry is not at home to much in the way of emotion and, for me at least, that makes her a hard character to like. Cooper is by far the more sympathetic and interesting of the two. Fry lacks his easy charm and instinctive ability to handle people. She also struggles to know what to do with probably the only mildly entertaining character in the book, the time-serving, politically incorrect, old-school copper, Gavin Murfin, who injects some much-needed humour into what would otherwise be a fairly dull tale of police work.

I’ve come late to this series, only having read the last three books. Without a doubt, it’s Ben Cooper who’ll draw me back again to the next one, rather than Diane Fry. The quality of Stephen Booth’s writing is, for me, the main saving grace. He breathes life into an array of minor characters and his vivid descriptions of the teeming rain across the hills and moors of the Peak District transport me back to the long ago days of being dragged there on school trips, invariably with inadequate waterproofs. To turn landscape and weather into a character in its own right is no mean feat.