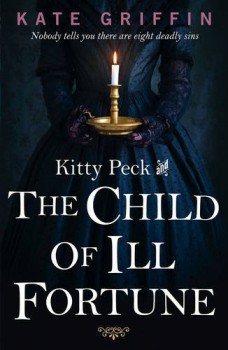 Kitty Peck and The Child of Ill Fortune

Kitty Peck is the reluctant heiress to Paradise, the criminal East End empire of her grandmother Lady Ginger. She is reunited with her estranged brother in Paris, and is persuaded to take a child back to London – but it is soon clear someone is determined to kill the little boy.

When Kate Griffin introduced us to Kittty Peck, the Limehouse Linnet was an uncertain and naive young girl, struggling to make her way in the world of Victorian music hall and to come to terms with her grandmother’s involvement in London’s criminal underworld.

In this second in the series, the spirited Kitty comes painfully of age. As the reluctant heiress to Paradise, the opium smoking Lady Ginger’s criminal East End empire, Kitty must face up to the fact that she is now in charge of an operation dealing with every kind of crime from male and female prostitution to corruption, blackmail and violence.

Isolated and even more uncertain, she travels to Paris in search of her estranged brother and is plunged into a decadent bohemian world of transvestism, where nobody is quite who he, or she, seems. She is reunited with Joey, and is so desperate to maintain the link, she agrees to a request  by one of his strange friends to take a baby boy with her when she returns to London.

But it soon becomes clear someone is determined to kill the child  – and anyone who stands in their way.

Aided by a series of cryptic clues from Lady Ginger, living out her final days in isolation, Kitty, with the help of her homosexual Italian artist friend Lucca, uncovers a link to the Romanov rulers of Russia – and a scandalous suggestion that England’s Queen Empress Victoria is not who she is believed to be!

This fast-paced historical mystery with its cleverly contrived twists and turns is a worthy follow-up to Griffin’s debut. Kitty is forced to shed her naïveté and her worthy resolutions in order to survive. The characterisation is once again superb and the dialogue convincing. The descriptions of the squalor, filth and depravity of 1880s Limehouse are graphically magnificent.

Kitty Peck And The Music Hall Murders was shortlisted for last year’s CWA Historical Dagger. This clever sequel combines the wit of the music halls with a great action story full of shades of light and macabre darkness.