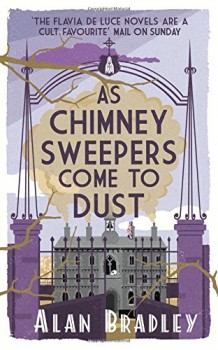 As Chimney Sweepers Come To Dust

When a mummified body falls out of a chimney on Flavia de Luce’s first night at her new school, life at Miss Bodycote’s Female Academy suddenly takes an interesting turn.

Flavia de Luce is back, but is very definitely not in her preferred surroundings. The 12-year-old with an abiding love of chemistry and a deep affinity with poisons has been exiled from her much-beloved Bishop’s Lacey to Canada in the wake of the revelations about her long-lost mother, Harriet.

Miss Bodycote’s Female Academy isn’t exactly Flavia’s cup of tea, but her interest is piqued by the fact that one of the mistresses has been accused – and acquitted – of the murder of her husband. By poison, of course.

Things also take a turn for the unexpected when a mummified body falls out of the chimney in Flavia’s bedroom, wrapped in a flag, with its head detached. That puts a very different complexion on her banishment, and Flavia throws herself into unravelling the mystery of the dead body and also the strange disappearance of several girls from the school. The two seem likely to be linked, and Flavia is determined to leave no stone unturned in her search for the truth.

The ongoing story arc of Flavia’s mother and the secret society called the Nide threads its way through the events of As Chimney Sweepers Come To Dust, with the twin revelations that Harriet was also a graduate of Miss Bodycote’s and is greatly revered by its current students.

Miss Bodycote’s Female Academy is a rather wonderful pastiche of schools such as St Clare’s and The Chalet School, with a dash of Greyfriars thrown in for good measure. The head girl is nicknamed Jumbo, most of the girls are known by their surnames and there’s even a French teacher called Dupont. Add to this mix a pair of sinister governors, a stern headmistress plus the ever-original Flavia, and things start to brew up like a rather unstable chemical experiment.

The plot romps along at a good pace, the characters are well-drawn, and the writing is, as always, a delight, as is Flavia herself. The immediate post-war period is beautifully evoked, and even with our young heroine a long way from home, the fading grandeur of Buckshaw with its eccentric inhabitants is never entirely out of sight or out of mind.

As ever, Flavia’s sleuthing is a clever and always entertaining mix of logical deductions, scientific facts and dogged persistence. Flavia is quick-witted, certainly not above lying if it will further her cause, and definitely not an average girl on the brink of her teens. But for all that, she never strains at the bounds of credibility, which is something of a minor miracle. I came relatively late to the series with the fifth books, Speaking From Among the Bones, but that certainly hasn’t hampered my enjoyment, and there’s just enough backstory to make newcomers feel at home.