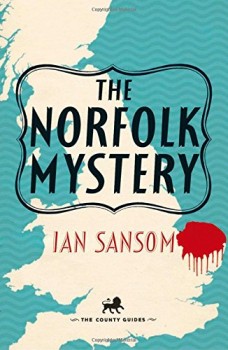 Wounded Spanish Civil war veteran Stephen Sefton accepts a job as assistant to the eccentric ‘Professor’ Swanton Morley who is writing a county-by-county guide to traditional England. Starting in Norfolk, they discover a vicar hanging by his church’s bell rope.

Having read this clever, if infuriating, book twice, I still can’t make up my mind whether Ian Sansom is bidding to create a new cult figure of the super-detective to rival Holmes or whether he is taking a none-too-gentle rise out of what many regard as the golden age of mystery fiction typified by the work of Conan Doyle, Agatha Christie and Dorothy Sayers. Perhaps it’s a little of both – and for the reader to decide.

It is certainly witty and entertaining in a distinctly off-beat way and the amount of research which went into it on north Norfolk alone must have been phenomenal. As much a creative, if now rather dated, travel guide as a mystery thriller, it’s outstanding.

But the series will stand or fall on its principal character – and he’s the original Marmite Man, so you’ll either love him or hate him! Named after a Norfolk village, ‘Professor’ Swanton Morley is an auto-didact and pretentious in the extreme.

Despite a total lack of formal education, this self-taught genius, prolific author and fount of all-round knowledge has established himself in the tabloids of the day as the so-called ‘People’s Professor.’ Were he alive today, this maddeningly self-opinionated, teetotal, anti-smoking, non-conformist leftie would be editor of The Guardian or airing his views endlessly on the BBC!

His assistant – and very much his Watson – is Stephen Sefton, who like so many upper class youth of the 1930s, wasted his Cambridge education, fell under the spell of the fiery Harry Pollitt’s brand of Communism and went to Spain to fight for the Republicans, only to return disillusioned and shattered both physically and mentally.

Morley drags the unwilling Sefton to his home county of Norfolk to start on his latest overly ambitious project – a county-by-county guide to traditional England. After poor Sefton is shocked by his initial meeting with Morley’s head-on daughter, the opinionated and rebellious Miriam, they commence work – only to find the body of a local vicar hanging by the bell rope of his own church!

Suicide or murder? Morley succeeds in avoiding any major detection, until, in a dénouement uncannily reminiscent of Hercule Poirot, he reveals all his conclusions, apparently arrived at in a Holmesian leap of logic, to an assembled congregation and the baffled police.

The Norfolk Mystery is different, charming and amusing – and the very stuff of whodunit literature without the aggressive sensationalism now in vogue.

But there’s so much missing. The story is set in 1937 and although there are references to the social and cultural mores, there is no mention of the growing threat of war with Lord Halifax on his first appeasement trip to Berlin, the Fascist triumph in Spain, or the Japanese invasion of China. Given Morley’s total self-obsession, I suppose that’s fair enough, but you would have thought the coronation of George VI might have got a mention!

Another 38 counties to go? If I were Sefton, I’d put a bullet in Morley’s head and save us all from the endless Latin tags, quotations, moral lectures, tweeds and sensible brogues of this crashing and frankly unlikeable bore!