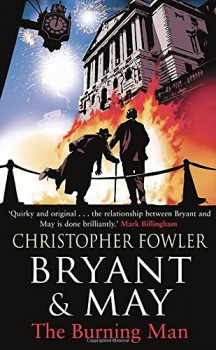 Bryant and May: The Burning Man

A burned body is discovered on the steps of a London bank whilst a mob runs amok in the city, protesting at the actions of the bankers. Soon more individuals are killed, always through the medium of fire.

The Square Mile in the city of London has erupted in riots amidst general anger at the bankers. Raymond Land, head of the Peculiar Crimes Unit, is summoned to where a badly-burned body has been found in the doorway of the Findersbury Private Bank. He is asked to co-operate with the police unit that is supposedly in charge of the case but on no account to give any responsibility to Senior Detectives Arthur Bryant and John May.

Bryant and May, the two most successful and most unorthodox members of the unit, inevitably get to know about the case. And Bryant, despite his deteriorating health, becomes very involved when yet more bodies are discovered. Each body has been subjected to a procedure involving fire and the killings look set to continue.

Bryant is born and bred a Londoner and interested in history too. So the story includes a great deal of historical detail. In particular Bryant often envisages buildings of previous ages which have given way to more modern developments. The author is adept at peeling away the layers of architectural London and revealing other worlds. Bryant’s role at one point as teacher to a small boy is a perfect tool for uncovering London’s past. Indeed, every opportunity is taken to conjure up the past, from the range of methods of killing by fire to discussion of Rembrandt’s Night Watchman and the ancient customs associated with bonfires.

Throughout the book there is a sensitively-written thread relating to Bryant’s health, and May’s role in support of his friend is very perceptive. This is unlike the relationship between two of the other detectives, which seems rather out of place.

The writing bumbles along in a very comfortable manner with exquisite touches and very skilful changes of focus, moving effortlessly and almost unnoticeably between conversations and chapters. In addition, the use of unfamiliar words such as ‘incunabula’ gives the novel an air of mystery that precisely mirrors Bryant’s world. However when necessary the pace can change to produce an exciting and frightening chase – it is never boring.

The Burning Man is a novel of contrasts. Whilst there are many references to modern technology such as wi-fi, Facebook, Twitter, Google, and LinkedIn, the history is never far away. There is sensitivity, pathos and humour, all of which make it such a good read.