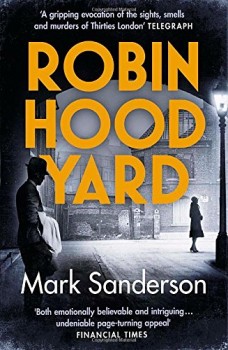 Mark Sanderson’s third adventure for crime reporter John Steadman and his lifelong friend Detective Constable Matt Turner, set in the years leading up to the Second World War, is a strange mixture of the good, the bad and the ugly.

The good: A wonderful evocation of the City of London in the late 1930s. From the pomp and ceremony of the installation of a new Lord Mayor to the wretched back street tenements, Sanderson paints a vivid picture of a Square Mile which has now largely disappeared, victim to Hitler’s bombers and the philistine property developers of the 1950s onwards.

The bad: Sanderson’s more than a little careless with some of his imagery and choice of words. In the 1930s, irate people didn’t give those who annoyed them ‘the finger’. That charming gesture arrived with the Yanks, circa 1942. ‘Accelerants’ to light a fire? Another American expression that didn’t come into use in the UK until everything had to be expressed in management-speak in the 1990s. The rank of Commander was not introduced in the Met until 1946 and I’ve not heard of its use in the City of London force before that.

The ugly: The various scenes of violence and the mutilations of the murder victims are dwelt on in enough detail to almost reclassify this as city noir. And the villains of the piece are so grotesque as to be almost laughable.

Reporter Steadman is summoned by his friend to a murder scene. The victim is chained to a bed and has had his penis cut off. When a second victim suffers the same fate, both Johnny and Matt try to work out what the connection between them other than they lodge inside the Square Mile. Meanwhile, Prime Minister Neville Chamberlain is trying to ensure peace at almost any cost. The Nazi persecution of the Jews increases in the lead up to Kristallnacht, while City bankers continue to trade with Germany and London appoints only its second Jewish Lord Mayor.

Growing support for Moseley’s British Union of Fascists has seen a spin-off organisation attack Jewish targets including a synagogue. And, as the murder count mounts, Steadman and Turner begin to suspect a link between the Fascist attacks and the killings – and Johnny uncovers yet another possible connection to some more than questionable trading by some bankers.

This odd mixture of an A-Z of the City, its history and literary associations, a thoroughly modern story of bankers’ malfeasance, police corruption, homosexuality, blackmail, murder and a touch of government sponsored killing, rattles along at a cracking pace. In fact sometimes it’s so jerky as to make you wonder what you’ve missed!

Johnny Steadman is a surprisingly modern hero with his decidedly politically correct viewpoint and his worries over the correctness of his feelings for his friend. All in all the book is an interesting parade of conspiracy theories played out in the shadow of war and a fine evocative of a lost age when the City – as now – had a seedier side beneath the glamour and glitz of an international business centre.