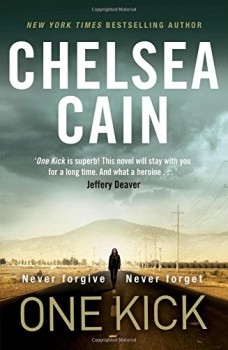 Kit ‘Kick’ Lannigan was abducted at the age of five and for six years starred in child pornography movies. Now, ten years after her rescue, she is presented with the opportunity to fight back against the abusers.

Kit ‘Kick’ Lannigan was abducted at the age of five. For six years, she was held by a couple who changed her name, told her that they were her new parents and used her to star in child pornography movies. When she was finally rescued, her memory of her puppy, Monster, was her only link to her previous life.

Now, ten years on, aged 21, Kick is estranged from her family. She lives with the ageing Monster and in the apartment below is her ‘brother’ James, another survivor of abuse. She has become expert in many forms of martial arts in order to feel secure and carries an alarming array of weaponry.

Kick spends many hours tracking stories of missing children, hoping to prevent another child from suffering her fate, so when a mysterious man known as Bishop appears in her apartment, asking for her help in tracking a missing boy, she readily accompanies him. They find the body of a woman in a house Kick is certain has been used to hold a child captive, but the house is booby-trapped and an explosion destroys it before they can call for back-up.

As they explore Kick’s past, it becomes clear that they are dealing with dangerous people and that the paedophile ring that held Kick is still active, putting her and those she loves in grave danger. Can they track down the ringleader and bring him to justice in time to save the missing boy? Who is Bishop and who does he work for?

Kick is a damaged character, understandably, but she is disappointing in her inability to put her martial arts skills to use when they are most needed. Despite her constant worry and precautions, she finds it difficult to act in the ways she would like to and reverts to being a ‘good girl’ when confronted by her past. Her relationship with her dog is her most redeeming feature as he is her firmest anchor to her original life and family and she will do anything for him.

This book is in places graphically violent, although it carefully avoids details of actual child abuse, while examining in detail the relationship between Kick and her abusers. Over the course of the book, she remembers many long-suppressed incidents from her childhood that help her to identify the man behind the abductions.

This is not an easy book to read, covering some uncomfortable subjects, and Kick is not an instantly likeable character, but as an exploration of a damaged individual it is well worth a read.