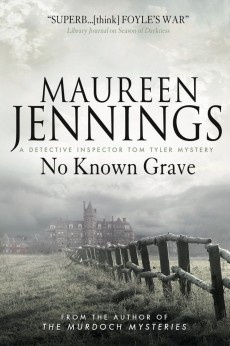 A convalescent hospital in 1942, run by Anglican nuns for badly injured servicemen, is an unlikely place for a double murder to take place. That, however, is what DI Tom Tyler finds when he is called to the hospital.

Detective Inspector Tom Tyler has been separated from his wife for more than a year and is convinced that he should make a completely new start. When a job arises in the Shropshire town of Ludlow he applies for it and is successful. He is told at his interview by the Chief Constable that the war has changed Ludlow and that even in 1942 it is no longer a quiet town in a quaintly rural setting. He has cause to remember these words when he receives a call from the almoner of St Anne's convalescent hospital, informing him that two people have been murdered in the night.

St Anne's, which is run by Anglican nuns who are also nurses, is devoted to the care of men and women severely injured during the war. Most have lost limbs and some, additionally, are blind. Others suffer from psychological disorders as a result of their experiences. The hospital is protected on all sides by a very high wall and it is difficult to imagine an outsider breaking in to commit the murders. On the other hand, Tyler sees that some of the patients could not possibly have committed the murders and the remainder – whilst they cannot be ruled out – are very unlikely to have done so.

We are confronted, therefore, with the locked room scenario, so common in murder mysteries, and the novel could so easily have become a routine and rather banal whodunit. That it doesn't is largely due to the sense of time and place that it conveys so accurately. The very fact that the action takes place in a convalescent home for badly injured servicemen and women is in itself a constant reminder.

And we also learn the precise nature of the circumstances that brought each of the patients to the hospital. There are references to El Alamein and Stalingrad that arise naturally without any sense of being forced. It would be difficult today to imagine disabled war veterans being ridiculed for their disability but – distasteful as it may be – such an incident has the effect of placing the novel in a time when sensitivities were a little less refined.

It might be expected that nuns living together would be all much the same and that they would be governed by their routine, but this is far from the case. One of them, older than the convent head, can scarcely disguise her displeasure at not having been offered that position and the head herself is still young enough – and human enough – to take a fancy to the handsome detective, though she is careful to keep her feelings well hidden. As often in detective novels of this kind, there are one or two characters designed to lead the reader down the author's garden path, but even these have a legitimate part in the novel and don't seem out of place.

For anyone who wants to read an intriguing thriller set in a convincing historical context this book would be an excellent choice.