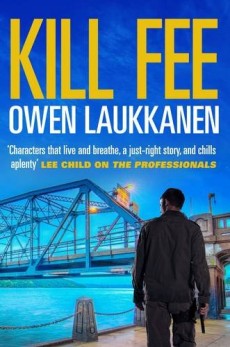 When a billionaire is gunned down, police get a good look at the shooter, but his dead eyes and slack face strike them as very odd.

Kill Fee is the third pairing of Minnesota Bureau of Criminal Apprehension detective Kirk Stevens and FBI agent Carla Windermere. They happen to be catching up and are on the spot when a man is shot going into a hotel. The shooter escapes, but not before Stevens and Windermere get a good look at him, and his weird lack of expression.

The flight of the culprit across state lines is enough to give the FBI jurisdiction, and since Kirk and Carla have worked to such good effect in the past, they are given the opportunity to team up again. Before too long they are able to link the latest shooting to other cases, and uncover a website offering murder for a price, where the operatives are traumatised veterans coerced into following the instructions of their handler.

The first two books in the series featured disgruntled graduates who took up kidnapping, and a professional who turned to bank robbery. Here again the villain is white collar, a sophisticated user of IT, and those out to catch him need to employ some imagination in their use of information sources to tackle a clever opponent. As in the earlier two books, Owen Laukkanen uses short chapters and detailed plot development, which provide exciting action for 400 pages with barely a break.

The basic plot feature of mental manipulation being used to create automatons who will do the will of their master is not of course a new one, The Manchurian Candidate and the Bourne series being particularly successful examples. In Kill Fee, the process is comparatively low-budget and some readers may find it a little unconvincing, but the results are presented as being flawed and overall credibility is not too much of a stretch.

The relationship between Stevens and Windermere continues to develop. Since their first meeting the pair have had sexual chemistry, and in their latest pairing came closest yet to acting upon their instincts, avoided at the last minute only by Stevens’ awareness that this would spell disaster for his marriage. Windermere in reaction turns to Mathers, a young FBI colleague, and this complicates the working relationship for a while. It will be interesting to see how the author sustains the heat between the two protagonists in further outings.

Laukkanen has found a recipe that is very readable. There is plenty of action and both dialogue and general description is tight, with no padding. Characters on both sides of the law are believable and amongst the bad guys there is always somebody with whom you can sympathise. My one quibble here is with the title: the company offering murders is called Killswitch; so why call the book Kill Fee?