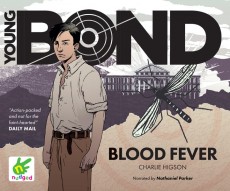 On a school trip to Sardinia, young James Bond has to rescue a friend’s sister from the clutches of a secret society.

Starting as he means to go on in life, James Bond, a schoolboy at Eton College, becomes involved with The Danger Society, a secret risk-taking club. On one of their escapades, he witnesses what appears to be some members of a secret society meeting in his school. Members of the society bear the mark M, which James later learns stands for the Millenaria, an ancient Italian society, believed to be defunct, who want to bring about the revival of the Roman Empire.

Then James hears that one of his friends, Mark Goodenough, has lost his father and his sister when their yacht was ransacked by pirates. With this tragedy hanging over their heads, James accompanies his friends on a school trip to Sardinia to learn more about the history and archaeology of the country. They’re accompanied by two masters, Peter Haight, young and likeable, and Cooper-ffrench, older and stuffier, who James suspects of being involved with the shady Millenaria.

Following an attack of what appears to be heat stroke which very nearly led to a nasty fall from a ruined building, James leaves the group to spend some time with his cousin Viktor, who lives on the north side of the island. There, James meets the sinister and unpleasant Count Ugo Carnifex, who has built himself a stronghold in the mountains where he can indulge in an extravagant lifestyle.

Charlie Higson’s young Bond is a likeable character with a level head and a chivalrous streak a mile wide, so when he realises a teenage girl is being held captive by Count Ugo, he’s determined to help her, even though it means putting his life at risk. Blood Fever delivers plenty of thrills, spills and narrow escapes. James is determined and inventive, and it’s not hard to see in the teenager the man he’ll become. Higson never stretches credibility too far, and there’s a distinct air of menace throughout.

Nathanial Parker, perhaps best known for his role as Inspector Lynley, is a lively narrator, shifting easily between James as a teenager and the older characters such as the heavily-accented Zoltan the Magyar, responsible for raiding the Goodenough family’s yacht and the lisping Count Ugo. He also manages the higher-pitched female voices without turning them into caricatures.

This is good, old-fashioned, fast-paced fun, with dastardly villains and daring schoolboys, and the girls are a pretty tough bunch as well, as the knife-wielding Sardinian teenager with the very apt name Vendetta soon proves.