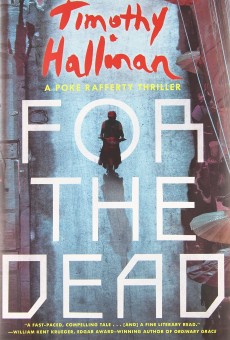 The purchase of a used phone exposes Poke Rafferty and his family to danger from a man with very powerful connections.

The phone contains photographs of two disgraced police officers recently gunned down in apparent revenge killings, pictures which somebody is determined to recover. Maiow and Andrew are at risk, and from the number of vicious thugs on the lookout for them, the man behind the search is clearly very powerful.

Luckily, Poke has a few things in his favour to help him put together a plan: a good friend in the police, and Andrew’s father’s position as a senior figure at the Vietnamese embassy. An alliance is formed to get to the bottom of a series of killings where the police were involved, and bring the perpetrator to justice.

This is a corrective vision to anyone who has been seduced by holiday advertisements into thinking Thailand is a paradise on earth. The police are so corrupt that a series of targeted killings can be mis-assigned for a decade, and where the existence of young children living on the street is accepted by society at large. Hallman uses both these obscenities to generate a powerful story.

Maiow plays a leading role in the story as a former street-dweller herself, now placed in Poke’s secure and loving home but understandably still full of insecurity about her ability to fit in with contemporaries at her posh new school. However, the quickness of mind and bravery honed by her years living the pavements comes to the fore to save herself and her companion when confronted with gangsters. In his afterward, Hallman confesses his love for Maiow as a protagonist, and this comes across in the book.

The police side to the story is not so uplifting: a tale of nepotism through which the ‘princelings’, or younger sons of the richer families that dominate the wealth in the country are levered into senior positions and then benefit from a rich seam of graft. What is uncovered by Poke and his friends involves the cynical use of violence which provides a shocking introduction to the book, and underpins the need to engineer a fast solution which will protect his family on a permanent basis.

The book reads very easily, has some quirky, endearing characters, and a plot which hangs together reasonably well. For someone so street-smart, Maiow’s return to the phone vendor does look a little unlikely, and the wholehearted commitment of a senior Vietnamese diplomat a little difficult to swallow, but shouldn’t put the reader to too much trouble. This is the sixth outing for Poke Rafferty, and fans of the series will not be disappointed.