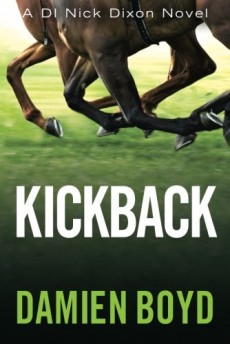 A soldier returning from Afghanistan holds his family hostage in an attempt to persuade police to investigate the death of his stable lad brother – and DI Nick Dixon is soon in the thick of the action.

DI Nick Dixon and DC girlfriend Jane appear to comprise most of Bridgwater’s CID contingent. And it’s a busy patch – a soldier holding his family hostage at gunpoint, a gang of dodgy Albanians, and the mysterious death of a young stable lad.

This is the third book in the series and the action follows on almost immediately from the events of Head in the Sand, with Nick nursing some mental and physical scars. But he’s right back in the thick of it when a soldier back from Afghanistan holds his family hostage. The bloke reckons this is the only way to catch the eye of the police and to force an enquiry into the death of his brother, who was kicked to death (supposedly by accident) by a horse at the local racing stables.

Kickback trots along at a decent pace, but it’s a tad on the thin side. It’s a perfectly serviceable mystery set in a picturesque part of the country – and our heroes make full use of village pubs on their travels. If you’re expecting non-stop racecourse action, you might want to look elsewhere – although Dick Francis wouldn’t have turned his nose up at the final scenes!

What we do get is a brisk, readable adventure that will keep you entertained for an afternoon. It’s very rare to feel that an author has under-written, but Boyd’s books (and I’ve read the whole series so far) would appear to cry out for a bit more work on the characterisation, for a start.

Both Nick and Jane are frustratingly under-drawn. So if you hoped the later books would flesh them out, you’re destined to learn little more about them, aside from the fact Nick’s a local lad and came home after a stint in the Met. And he’s diabetic. As for Jane – ask me another.

Damien Boyd is a Somerset lawyer, and appears to know his patch well. I like the no-nonsense plotting enough to keep reading the series. I’d just like to get to know the cast a little better, please – it’d be good to have a fighting chance of picking them out in an identity parade!