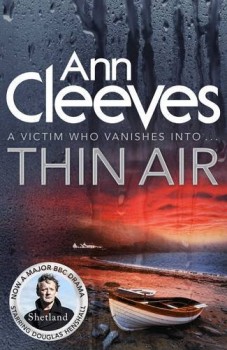 Three old university friends, Caroline, Eleanor and Polly, leave London for the Shetland Isles where they are to celebrate Caroline’s recent marriage to a Shetlander. Almost immediately after the party, one of them disappears and her body is found in a loch.

Ann Cleeves has achieved considerable success, both with the written word and with the television adaptations of her work. This is another novel in the Shetland series featuring police detectives Jimmy Perez and Willow Reeves.

The novel opens with a party being held on Unst, the most northerly of the Shetland Islands. The reason for the party is Caroline’s recent marriage in London to Lowrie, a Shetlander, and his desire – and that of his family – to celebrate in their own Shetland style. The newly-weds are accompanied by Eleanor and Polly, two old friends of Caroline from university days, and their husbands, Ian and Marcus.

When the party is over the four return to the rented house and stay up late drinking wine. Polly and Eleanor talk outside for a time and when Polly decides to go to bed her friend tells her she will come in shortly. As she turns to go, Polly thinks she sees a young girl dancing along the tideline. Eleanor has mentioned that she too has seen the little girl. When it transpires that there is a local superstition about a young girl who was drowned on the beach years before and who is sometimes seen dancing there, we are presented with what is almost a ghost story.

The Shetland setting, moreover, contributes to this feeling of the uncanny, a certain other worldliness. It is summertime and the days are long, but this being Shetland, it is often misty. We have the feeling that much could happen in the mist of which we would know nothing.

We certainly know nothing of the death of Eleanor, whose body is found in a loch on the day after the wedding. It has clearly been arranged, ruling out any possibility of suicide but nobody appears to have a motive for murder. We learn something of the relationship that had existed between Eleanor and Lowrie, who had been at the same university as the girls. Apparently, Eleanor’s attachment had not been as strong as Lowrie’s and his parents feel that he had never really recovered after she ended their juvenile affair.

The visitors to the island are naturally suspect but it isn’t obvious what any of them had to gain. Eleanor had not always got on well with her husband, Ian, but this was mainly because they came from different social classes, Eleanor’s parents being educated and wealthy, whereas Ian’s were from a much humbler background. There is certainly nothing to indicate that Ian would even be violent towards his wife, let alone murder her.

The two detectives on the case, Jimmy Perez and Willow Reeves, have little on which to base an investigation and begin to wonder whether the myth of the drowned girl might be important. It had certainly been important to Eleanor who had her own TV production company and was planning to make a film about ghosts and contemporary haunting. Perez learns that she had been fascinated by the myth of the drowned girl – the “Peerie Lizzie” story as it is known on the island. The wedding celebrants, however, are not the only strangers to the island. There are two men, known to be gay, who have bought an old house and turned it into a hotel, and who come under suspicion merely because they come from the mainland.

As in her previous novel, Dead Water, Cleeves makes use of the contrast between the two police detectives. Perez is introspective and very unforthcoming and Willow Reeves never knows what he is thinking. She is more inclined to be doing something, even if it is not always clear what needs to be done. Technically, she is the senior detective and in charge of the investigation but she rarely gets her way when they disagree about how the case should be handled. The tussles between the two are also complicated by the fact that Perez has recently lost his wife, whom he loved deeply. This is something Willow has always to consider as she finds herself being gradually drawn towards him, even though he seems unaware of her interest. Whether she will become further drawn to him and whether he will become more aware are questions that fascinate the reader as the case progresses.

There is so much for the reader to enjoy in this book that, if the final motive for the murder is not entirely convincing, it doesn’t seem to matter. If a television version is made its highly atmospheric quality alone will make it eminently watchable.