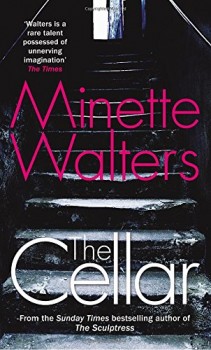 Muna was bought from an orphanage at the age of eight by Mr and Mrs Songoli and has been forced into a life of domestic slavery. But she is a survivor …

Minette Walters is back with another novella, this time a dark look at the topical subject of domestic slavery. Muna was eight years old when she was bought from an African orphanage by Yetunde Songoli and her husband and brought to London. She sleeps in a cellar, is not allowed to play any part in their affluent lifestyle other than to cook and clean, and is abused by Yetunde Songoli, her husband Ebuka and their two over-pampered sons.

Muna has never been outside the house and has only learned to speak English from listening to the television. Despite that, her mind is sharp and she’s very definitely a survivor. When Abiola, one of the two boys, goes missing on his way to school, Muna is passed off as the Songoli’s daughter, her lack of English blamed on learning difficulties and – somewhat surprisingly – the police seem to believe this, despite the girl’s obvious malnutrition. For Muna, Abiola’s disappearance represents a chance to wear nicer clothes and pretend to be part of a family that she secretly loathes.

With the police having no clues as to Abiola’s whereabouts, life for the Songoli family gets worse when Ebuka falls down the cellar steps and loses the use of his legs. When he’s finally discharged from hospital, his wife resents him and he’s forced to become reliant on Muna, a girl he’s raped and abused for as long as she can remember.

The Cellar is a deeply depressing look at domestic slavery, with a side order of rape and female genital mutilation, but despite what has been done to her it becomes increasingly difficult to sympathise with Muna when it becomes clear that she has found her own ways to hit back against the family who have been keeping her prisoner.

The Cellar is compelling without being enjoyable. As ever, Walters wallows in the darker side of human nature, but despite the depth and darkness of the central theme, there’s something more than a little shallow about the book, possibly as a consequence of the novella format. The ending is ambiguous and left me feeling a little short-changed, not a feeling I’m used to getting with her work. Without a doubt, I prefer her full-length books, but anyone who likes a heavy dash of horror with their crime will doubtless feel at home with the deeply unpleasant Songoli family and the girl they’ve made their slave.