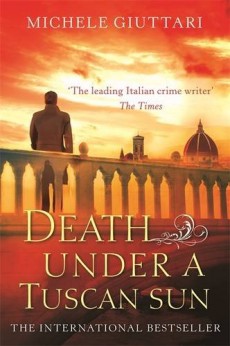 Death Under a Tuscan Sun

Chief Superintendent Ferrara is dismayed to hear that two dangerous prisoners have escaped from jail in Pisa. Later, a well-known lawyer and his wife are found murdered in their gated community a few miles from Florence.

Some years ago Chief Superintendent Ferrara sent a very dangerous criminal to jail. At the start of the book this prisoner has made friends with the son of a Mafia boss and the two of them mysteriously manage to escape. Despite his on-going workload, Ferrara is worried and sets in motion enquiries to track the two convicts down. Then he receives news of a double murder in a gated community in the countryside outside Florence. The investigation of this begins to uncover some much darker secrets.

The story involves numerous plotlines, all intricately woven together. There is an on-going thread that links them although it is not until over halfway through the book that any tension is generated, caused by the abduction of a young girl. It is strange that neither the identity of the killers nor the whereabouts of the prisoners is gripping enough to cause any tension prior to this abduction. It is just not that sort of book.

Ferrara appears to see the crimes as factual and cold, almost academic, just needing to be dealt with. Nevertheless, the book is intensely readable due to the sharp and incisive writing style and to the way in which the character of Ferrara is portrayed. He appears absolutely genuine and there is a good balance between the development of the investigation and reflection on the impact that this line of work has on Ferrara and his family

The book is deep and dark throughout and brings to light the very murky undercurrents of the society in which Ferrara lives and works. Indeed, the weight of all the corruption really weighs down on him. Is it necessary, though, to describe in such great detail each and every depraved act that the investigation uncovers? The message is clear that these crimes pervade the society from bottom to top and that it is important to at least try to uncover them in order to put a stop to the resulting corruption. The pride in the positive outcome of identifying the miscreants shines through the final chapters of the book. And there is even time for a miniscule mention of the delights of the Tuscan countryside!

This is a highly competent work of fiction that feels as though it is being written from the heart of someone very experienced in the serious and dangerous work of the police in Italy. The complexity of the plot, the sparse and efficient use of words, and the depth of the main character can only be admired.