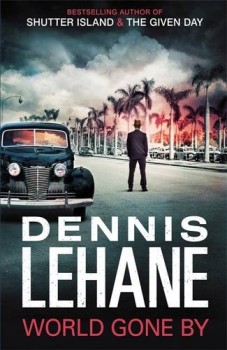 Joe Coughlin is the golden boy of gangsters – but someone is apparently out to kill him. And he thinks he’s being haunted by a strange child-like ghost.

I can take or leave gangster books, and I don’t read much in the way of historical crime fiction, but hey, I’d read Dennis Lehane’s shopping list. So I’m glad I gave this faintly bizarre and unsettling book a go.

It’s 1942 and war is raging in Europe. The Americans are feeling the pinch as well, and businesses are struggling – including the more dodgy set-ups.

Joe Coughlin is the golden boy among gangsters. He’s seemingly untouchable and respected – if you can call it that – by friends and foes. His wife was murdered some years back, but he’s devoted to his young son Tomas, who he’s bringing up alone.

Things take a turn for the deeply weird when he starts seeing what appears to be a ghostly boy. And he’s summoned to meet a woman in prison, who tells him his life is at risk and that he’s going to be killed on Ash Wednesday. She will only reveal the name of the would-be killer if Joe does a favour for her – which definitely involves going into the lion’s den.

World Gone By is a book I inhaled in a couple of sittings, completely taken by the atmosphere and Lehane’s world-building. Looking back on it later, the plot itself is moderately unremarkable. But that doesn’t matter in the least. This is an intelligent, character-driven book that turns its full glare on the racism, corruption and casual brutality of the period through the eyes of a man who is no angel, but has some morals.

Lehane is one of the best around when it comes to characterisation and painting in the realism of urban life – this time Boston – and of Prohibition America. The recurring theme through all his books has been working class friendships, and World Gone By is no exception. Perhaps most memorable are his portrayals of the various gang factions, from the hideous King Lucius holed up on his boat behind terrifying guards, to the cool Montooth Dix, to garrulous hitman Vivian Ignatius Brennan.

He even edges into John Connolly territory with a touch of the woo-woo – and in the wrong hands, that could have been laughable or plain stupid. In Lehane’s dark, crisp prose, it’s thoroughly unsettling.