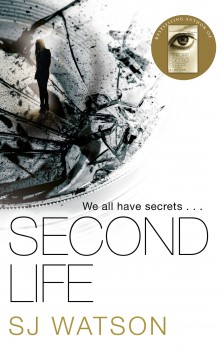 Julia has looked after her sister Kate’s son most of his life although Kate wanted him back. When Kate is murdered, Julia takes over Kate’s online life to try to find her killer. Can she cope with the consequences?

When she was growing up, Julia looked after her sister, Kate. Later, at a point in her life when Kate was struggling to cope, Julia and her husband offered to look after Kate’s son, Connor, and then never gave him back. When Kate is murdered Julia is badly affected and tries to find out what happened. She makes contact with Anna, Kate’s flatmate, and discovers that Kate had an active life online. Julia takes on Kate’s online identity with frightening results.

This is a psychological novel about what happens to Julia as she begins to lie and build an imaginary world. It is a good example of the way in which relationships formed over the internet can develop much more quickly than those based in the world. It also explores the idea of trust, how the real truth can sometimes be well hidden underneath the seemingly normal conversations that people have. Knowing what to believe and who to trust was hard enough even before the era of social media.

The book is written from the viewpoint of Julia. When a book is written in the first person it feels right to believe in that person and at first this is the case in this book but as Julia’s interpretation of events becomes more suspect, the seeds of doubt are sown. For example she dresses in a tight bright red dress and high heels, the gift of her lover, as is the champagne she is drinking, while she waits for him in a hotel lobby. She is surprised when another man approaches her, but can only think of doing what she thinks her lover wants her to do. This behaviour is so unlike what she would do in ‘normal’ life, but she wants to please. Such insecurity informs much of her thinking and encourages the reader to have sympathy with her.

As the story progresses Julia’s judgements thus become just a little, but not totally, unbelievable. Some of her decisions near the end really do not match with the facts but this is one way in which the tearing pace of the novel is maintained.

Indeed in the second half of the book there is hardly time for the reader to breathe – the story becomes utterly gripping. The level of emotion for example, between Julia and Anna, Kate’s flatmate, when they meet on a London station concourse, is so well portrayed. A possible criticism with this style of writing is that being pushed along at such speed sometimes leads to losing the thread, not realising just who is speaking. This happened both near the start and the end of the book, necessitating a re-read of both of these sections at a slower pace.

One problem with a story that only explores the mind of one character is that the other characters are not developed in any depth – only seen as they are perceived by the main character. However, it is testament to the quality of both the plot construction and the writing that the book is so consuming.