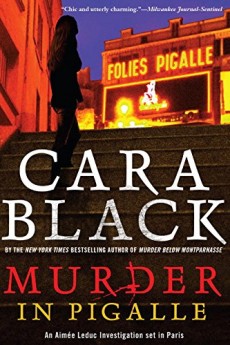 When her friends’ daughter Zazie goes missing in pursuit of a child molester, Aimee Leduc begins her own investigation.

Aimee Leduc runs Leduc Detective, a Paris agency, and in June 1998 is alerted to the latest in a series of assaults on young girls by Zazie, the daughter of friends. She agrees to assist 14-year-old Zazie in following up some information gathered by a classmate, but when Zazie goes missing Aimee realises that the girl has put herself in danger.

The police decline to take action until 24 hours have passed, but Aimee knows that time is crucial and, despite being five months pregnant, jumps into action. With the help of colleagues Rene the dwarf and Hippie Saj she follows up a few thin leads in and around Pigalle, fighting off nausea and the sticky heat of a Paris summer.

This is the 14th outing for Leduc and the character will be familiar to many. For those that are not, sufficient background is given to fill in the necessary detail: she is every inch a chic Parisiene notwithstanding her pregnancy. Her boyfriend has obligations to a wife and child and plays little part in the book; her colleague Rene is happy to take over paternal duties when the time arrives.

As the action takes the protagonist around Pigalle there are plenty of observations about the buildings, the history, and the people who occupy the space, both now and in the past. The text is larded with French slang, mostly understandable. All this adds up to a pretty convincing picture of the neighbourhood which will appeal to those looking for a taste of the authentic.

Some will find Black does give rather too much detail about clothes labels, problems with maternity clothes, and whinging about the problems of maternity generally. No doubt it is a challenge frantically rushing about prompting unwilling witnesses when you are five months pregnant, but I feel this is an aspect that will more readily interest women readers than men.

The action is non-stop, driven by Aimee’s relentless push to save her young friend, with a frequently-restated sense of urgency throughout. The action is firmly on Aimee apart from occasional chapters on a related sub-plot about a robbery, seen through the eyes of a reluctant participant. None of the characters apart from Aimee are developed to any great degree, so appreciation of the book greatly depends upon how sympathetic a protagonist you find her.