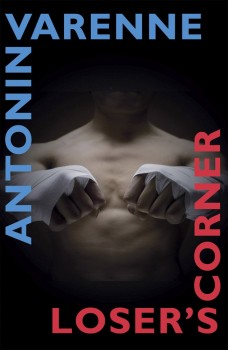 Policeman and club boxer George Crozat, facing to the end of his career in the ring, accepts an offer to make a profit with his fists – and becomes a pawn in a dangerous game where powerful men will go to any lengths to hide the past.

This dark and personal thriller, based on the experiences of Antonin Varenne’s father, shines a light on the darkest part of France’s colonial history – its legacy, which lasted for more than 50 years – and still casts a shadow over the country today.

Loser’s Corner is like no crime fiction you have ever read, both more and less a historical narrative about the Algerian war and a contemporary hard-boiled crime story, featuring bad cops, fixed boxing bouts and ultra right-wing nationalism. Corruption, torture, conspiracy and revenge drip from every page. Murder is a staple in the bitter Guerre Sans Nom – the war without a name – which ended with Algeria’s independence in 1962.

This exceptional thriller, set in two countries and both past and present, has a strong narrative voice. Much of that is due to a fine translation by Frank Wynne. He takes Le Mur, le Kabyle et le Marin and renders it in muscular, pared-down prose to make the story grittily impressive and utterly real.

George ‘The Wall’ Crozat is a none-too-bright Paris police municipale and club boxer with an impressive record, coming to the end of his ring career. Tired of seeing himself as a punchbag, and broke, he accepts an offer from a shady bouncer and is soon involved in a violent web of intrigue extending into the sordid colonial past.

His story runs parallel with that of Pascal Varini, a young, socialist, idealist and rebel, sent as punishment to a torture and death camp run by the dreaded ‘intelligence gatherers’ of the Dispositifs Operationnels de Protection in 1957. For much of the story, Varenne alternates chapters featuring these two non-heroes, both desperately seeking something they can’t quite identify.

French noir is often far removed from the English or Scandi-crime version. Here there is no specific crime or investigation, just petty criminals, bent police, whores, alcoholics, sadistic paras and Algerian cut-throats fighting for their land – men mistreated by life, some surviving to nurse wounds they refuse to allow to heal. Finally Crozat blunders towards the link between his sordid Parisian underworld and the atrocities of the war in an explosive and bitter finale.

This is uncompromising fare. If you want brilliant detectives, fast cars and glamorous women, criminal geniuses or heroic soldiers, forget it! Apart from the elegant, almost haunting, Algerian sections, and authoritative storytelling, there is the impact of the socio-political elements – included not simply to give respectability to a nihilistic and brutal tale, but an integral part of it. Loser’s Corner is not a comfortable read, but quite brilliant.