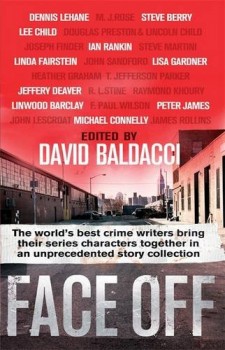 Eleven short stories featuring some of the best known protagonists and authors in the field, set mainly in America and covering most types of crime with the occasional twist of horror or the supernatural.

This is my idea of the ideal holiday read. Eleven individually crafted short stories featuring some of the biggest names in crime fiction. Each is short enough to be read over a drink before dinner or while you’re lying by the pool. There’s no complicated plot or cast of characters to remember. Each, as befits the professionalism of its authors, who between the 23 of them have dominated the bestseller lists for many years, is a little gem in itself.

It takes as much, if not more, skill to present a protagonist in this sketch form as developing the character over 300+ pages. It is enormously to the credit of the writers and editors that none is ever overshadowed. This book is the fourth venture by the International Thriller Writers. And following one of ITW’s few rules – never follow anyone else’s ­– all the stories were donated to avoid contractual hassles – and in a complete break with tradition, each writer allowed his or her major protagonist to be paired with another.

And it’s all brilliantly stitched together with brief synopses of the stories and author profiles by Baldacci, who knows a thing or two about writing himself, but couldn’t resist a sly dig at the idea of the 6ft 5”, 20+ stone walking wall of aggression that is ex-military policeman Reacher being played on film by the tiny Tom Cruise!

It’s not fair to try to pick a favourite. Even writers I’ve not come across before stepped effortlessly up to the plate with some of the genre’s iconic names. If I had to choose, I’d go with the Reacher/Heller combo who feature in a simple, almost casual, tale which says everything you need to know about both of them.

How the authors did it, I don’t know. Half and half each? Both write and then rewrite? Individual or joint plot lines? Who takes over where? However it was done, it’s superb. Face Off is a book to keep and re-read whenever you’re in need of a quick lift.