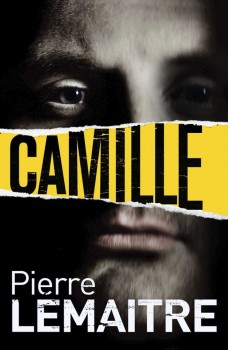 Anne Forestier, the new woman in Camille Verhoeven's life, goes into a toilet in a fashionable shopping quarter and runs into three armed men just on the point of carrying out a robbery.

It is not entirely clear whether Pierre Lemaître had a trilogy in mind when he sat down to write Irene and it may be that it was the success of that book, and the even greater success of Alex, that prompted a third. Camille will also have its admirers but it has to be said that it isn't up to the standard of the previous two. This book is shorter than the others and seems to show signs of being rushed out.

The plotting is less convincing than in the two previous novels and there are even signs that the author has changed direction as he went along. However, the opening is quite riveting. A woman who has gone shopping in an exclusive area of Paris is surprised by three men who are about to carry out a robbery. What follows is a brutal - some might feel too brutal - account of what is done to her to ensure that she doesn't compromise their plans to rob a jewellers. It is a little difficult to believe that, following the merciless beating inflicted on her, she is still able to get to her feet and make her escape. Perhaps it is even more difficult to believe that they allowed her to live, particularly as she had seen their faces. Nevertheless, survive she does, if only just.

It turns out that she is Anne Forestier, the new woman in Camille's life, with whom he is deeply in love. She is very beautiful, very feminine and very desirable and it’s all too easy to agree with Camille when he says he doesn't know what she sees in a man who is 50 years old, bald and only 4 feet 11” tall. Moreover, he still has not ceased to mourn Irene, his first wife, who was murdered by a psychopath.

Just as surgeons don't operate on their relations, so detectives are not allowed to investigate crimes against members of their family. Furthermore, the crime is not of the kind that would normally be allocated to the Brigade Criminelle. However, Camille is determined to find the man who has dared to attack in such a brutal fashion the woman he loves. He knows that the new Commissaire Michard will never allocate the case to him unless he has something to offer and he makes up the first of his lies to justify his investigation of the case - that he has been given a tip by an informer. Much more deceit will be needed before the case is resolved and Camille has no hesitation in doing or saying whatever is needed for him to apprehend the criminal.

Part of the novel contains passages in the first person where the man being sought addresses the reader. It is quite clear from what he says that he is planning to kill Anne - something he apparently failed to do at the scene of the robbery. It is also obvious that he is being kept aware of every move Camille makes. There is never any clue given as his identity and Camille is the only one who begins to suspect who is leaking information to him and, eventually, who he is.

Whilst there are blemishes in the narrative, there is no doubt that, as in the two previous novels, suspense is maintained to the very end. It will not come as any surprise to those who have read the first parts of the trilogy that there is no happy ending. Camille realises that he has acted alone and unofficially to such an extent that – whatever the outcome – his career as a detective is bound to be over. It is something he expected and was prepared to accept as soon as he decided that the woman he loved was more important than any other consideration.