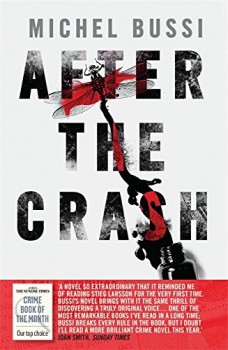 A three month old baby is the sole survivor of a horrific plane crash. Two families come forward to claim the little girl, signalling the start of a long and inconclusive investigation.

There was something particularly chilling about having started to read this book the day before the terrible tragedy of the Germanwings Airbus 320 crash, and it was hard to shake off those images and concentrate on fiction at such a time. The parallels were all too close for comfort.

In Michel Bussi’s UK debut, a plane crashes into the mountains on the French-Swiss border. In this case the crash is accidental rather than deliberate, but the early scenes are still hard to read, and even harder to look back on in the shadow of real life events. The sole survivor of the crash is a three-month-old baby girl, but matters are complicated by the fact that two babies of similar age were on board the doomed flight and it is not known which one survived.

Two families come forward to claim the baby girl. One family is rich, one is poor, and both passionately believe the baby belongs to them. Is the child Lyse-Rose or Emilie? Should she be brought up by the rich de Carvilles or the poor Vitrals?

After the scene has been set, the story picks up 18 years later, told partially through the diary of Crédule Grand-Duc. The private investigator had been hired after the crash by Mathilde de Carville, who believed – and still believes - that the child is her granddaughter, Lyse-Rose, and has spent 18 years and a fortune trying to prove this.

Grand-Duc, despite having received a large stipend each year to further his investigations, is still no nearer to uncovering the truth about the parentage of the child, now known as Lylie, and, believing himself to be a failure, intends to take his own life. Before taking the final step, the embittered investigator sees something and has a road to Damascus moment about the quest for the truth that has all but consumed him. However, Grand-Duc is killed before he can impart his new knowledge.

After The Crash follows Marc Vitral’s search for the truth about the parentage of the girl he was brought up with but for whom he’s now started to have distinctly unbrotherly feelings.

The story starts with a gripping premise and steadily builds on that, and although at times it felt like information was being drip-fed rather too slowly, with the sections from Grand-Duc’s diary feeling sometimes too much like a narrative device, I still couldn’t turn aside until everything had been unravelled. Bussi delivers an intriguing and multi-layered psychological thriller that gets its hooks in early and doesn’t let go.