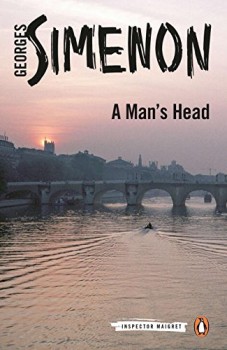 Chief Inspector Maigret embarks on an audacious scheme to prove the innocence of a man awaiting execution and must confront a killer convinced of his own intellectual superiority.

In the forty years up to 1972 the Belgian Georges Simenon, one of the true world greats of crime writing, published 75 novels and 28 short stories featuring the Paris detective Inspector Maigret.

Penguin are re-releasing the complete series in modern translations under their Classic brand – and that appellation has never been more deserved. If you’re returning to Maigret, the new wording, if anything, improves the read. If you’re discovering him for the first time, welcome to the world of classical detective fiction without any trimmings, mental traumas or buckets of blood.

A Man’s Head is one of Simenon’s earlier books and an ideal introduction, capturing as it does, Maigret’s brooding presence and highlighting his bloodhound qualities in the search for justice and in seeking out his man.

Maigret, now a DCI in the Police Judiciare, is unhappy about the conviction of a delivery man of limited intelligence for a double murder. Bluntly he insists that the man, awaiting execution in Paris’ grim Santé prison, is either: “Innocent or mad”.

He persuades his superiors to authorise a scheme to uncover the real killer, but must put his own career on the line with a daring plan to allow the prisoner to think his ‘accomplice’ has fixed an escape from the High Surveillance wing – death row – and for him to be followed through the autumnal streets, posh cafes and dark alleys of Paris.

Maigret is faced with an adversary convinced of his own intellectual superiority and a series of impossible and contradictory clues, and gives himself just ten days to save his name and job and prove that the escapee is a fall guy framed for what appears the perfect crime.

This is Maigret at his best: married to his job, managing his team while recognising and accepting their limitations – and relying on his own creative investigatory skills. And it really is a classic: engaging, encompassing and enjoyable.